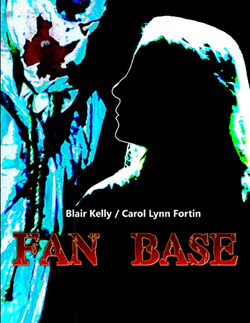 Fan Base is a product of Saint Studios Films, LLC, and was released on Vimeo-On-Demand on August 4, 2021.

In the early 80s and late 90s, actress Janey Romero (Carol Lynn Fortin) and actor Steve Cartwright (Lewis Lafferty) are launched into the Hollywood spotlight after starring in a four-part horror film series titled Soul Drinker. The series garners a tremendous cult following of fellow horror enthusiasts across the globe; one of which is Cray (Blair Kelly), a crazed horror fanatic and long-time fan of Soul Drinker.

Under the impression that Steve Cartwright is his long lost father, Cray manages to track Steve down in an attempt to re-establish a connection with him. Steve reveals that he is not Cray's father, which sends Cray, a seemingly harmless, but secretively psychotic individual, into a frenzy. It is at that point that Cray strangles former horror icon, Steve Cartwright.

Meanwhile, Janey Romero, who is still living down her success from the Soul Drinker series, is in the process of filming the third installment of the dreadfully bad Mother of Nature series, in which she is not fond of. She has persistently distanced herself from the Soul Drinker series due to the violence and gore. Although, despite her efforts, she cannot seem to shake the notability it has brought her.

While filming, news breaks of Steve Cartwright's death, which shocks Janey, along with the rest of the cast and crew. Not long after, Cray manages to track down Janey at the set of Mother of Nature. All hell breaks loose when Cray decides to make his own Soul Drinker installment, and begins killing off the cast and crew. Janey nearly manages to escape until she comes face-to-face with Sean (Garrett Stone), an amateur filmmaker and fellow horror enthusiast, who reveals that he has been following Cray and filming the murders take place. Sean reveals to Janey that Soul Drinker V is already in production. Janey prepares to meet her end when Cray approaches her and Sean. However, to her surprise, Cray murders Sean instead. Cray then approaches Janey and they share one last look with each other before Cray disappears into the night, leaving behind his mask and the now traumatized Janey Romero.