watch 01:56
The Loop (Movies)
Do you like this video?
Play Sound
Fantastic Four 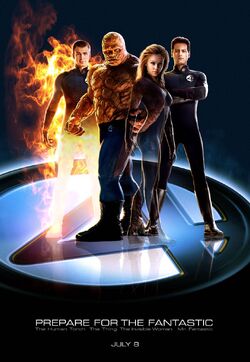 Directed By
Tim Story
Produced By

Fantastic Four is a 2005 American superhero film based on the Marvel Comics comic Fantastic Four. It was directed by Tim Story, and released by 20th Century Fox. It is the second live-action Fantastic Four film to be filmed. The previous attempt, a B-movie produced by Roger Corman only for the purpose of retaining the film rights, was never intended for a theatrical release.

The film was released in the United States on July 8, 2005. It was the third superhero film of the year, after Elektra and Batman Begins.

In 2007, a sequel, Fantastic Four: Rise of the Silver Surfer, was released.

Dr. Reed Richards (Ioan Gruffudd), a genius but timid and bankrupt physicist, is convinced that evolution was triggered millions of years ago on earth by clouds of cosmic energy in space, and has calculated that one of these clouds is soon going to pass near Earth. Together with his friend, the gruff yet gentle astronaut Ben Grimm (Michael Chiklis), Reed convinces his equally brilliant but conceited Massachusetts Institute of Technology classmate Dr.Victor von Doom (Julian McMahon), now CEO of Von Doom Industries, to allow him access to his privately-owned space station to test the effects of exposure to the cloud on biological samples. Von Doom agrees, in exchange for control over the experiment and a majority of the profits from whatever benefits it brings. He brings aboard his beautiful chief genetics researcher (and Reed's ex-girlfriend from MIT) Susan Storm (Jessica Alba), and her hot-headed brother Johnny Storm (Chris Evans), he is a private astronaut who was Ben's subordinate at NASA but is his superior on the mission.

The quintet travels to space to observe the cosmic energy clouds, but Reed has miscalculated and the clouds materialize well ahead of schedule. Reed, Susan and Johnny leave the shielded station to rescue Ben who has gone on a space-walk to place the samples, and Victor closes the shield behind them. Ben receives full exposure out in space, while the others receive a more limited dose within the station. They return home but soon begin to develop strange powers. Reed is able to stretch like rubber; Susan can become invisible and create force fields, especially when angered; Johnny can engulf himself in fire at temperatures in excess of 4000 K (erroneously described as supernova-like in the film), and is able to fly; and Ben is transformed into a large, rock-like creature with superhuman strength and durability. Victor meanwhile faces a backlash from his stockholders due to the publicity from the failed mission, and has a scar on his face from an exploding control console he was near during the cloud's pass.

Ben returns home to see his fiancee (Laurie Holden), but she cannot handle his new appearance and flees. He goes to brood on Brooklyn Bridge and accidentally causes a traffic pile-up while stopping a man from committing suicide. The four use their various powers to contain the damage and prevent anyone from being hurt. While the public cheers them for their efforts, Ben sees his fiancee leave her engagement ring on the ground and run. Reed hands a heartbroken Ben the ring and vows to find a way to turn him back to normal. The media dubs them "The Fantastic Four" for their efforts. Victor watches the news story and is told that his company is lost now, the group's fame overriding the company's fate with the media. The four move into Reed's lab in the Baxter Building to study their abilities and find a way to return Ben to normal. Victor offers his support in their efforts but blames Reed for the mission's failure, the lights flickering as he grows enraged.

Reed tells the group he will construct a machine to re-create the storm and reverse its effect on their bodies, but warns it could possibly accelerate them instead. Meanwhile Victor continues to mutate, his arm turning into an organic metal and allowing him to produce bolts of electricity, and he begins plotting to use his new powers to take his revenge. Victor drives a wedge between Ben and Reed by telling Ben Reed has no desire to change himself back, as the group's research has allowed him to rekindle his relationship with Susan. Reed and Ben argue, Ben walking out in a rage. This motivates Reed to attempt the machine on himself, but he cannot generate the power needed to push the storm to critical mass. Doom hears Reed tell Susan this through security cameras and has Ben brought to the lab. Ben is placed in the machine and Doom uses his abilities to produce the electricity needed to power it, turning Ben back to normal and accelerating Doom's condition, causing much of his body to turn to metal. Victor knocks the human Ben unconscious and kidnaps Reed.

Victor - now calling himself 'Doom' - dons a metal mask to hide his physical disfigurations and incapacitates Reed using a super-cooling unit. Doom fires a heat-seeking missile at the Baxter Building to kill Johnny, and Johnny flies through the city to evade it, lighting a garbage barge on fire to trick it. Susan rushes to confront Doom as Ben begins to regret his decision to turn normal. Susan frees Reed and battles Doom but is outmatched - Ben arrives to save her, transformed into The Thing again by reusing the machine (speaking his signature line, "I'ts Clobberin' Time"). The battle spills into the streets, and the four assemble to battle Doom. Johnny and Susan combine their powers to wrap Doom in an inferno of intense heat, and Ben and Reed douse him with cold water, inducing thermal shock and freezing Doom in place. As an epilogue, Ben informs Reed that he has accepted his condition with the help of Alicia Masters, a blind artist for whom he has developed feelings, and the team decide to embrace their roles as superheroes and unite officially as the Fantastic Four. Reed proposes marriage to Susan, who accepts and they share a kiss. Meanwhile, Doom's statuesque remains are being transported back to his homeland of Latveria when the dockmaster's electronic manifest briefly experiences electronic interference, suggesting Doom is still alive.

getting major hype on its release and becoming a box office success, the film was positively received by both critics and fans.

Retrieved from "https://movies.fandom.com/wiki/Fantastic_Four_(2005)?oldid=130381"
Community content is available under CC-BY-SA unless otherwise noted.