Start a Wiki
watch 01:27
The Loop (Movies)
Do you like this video?
Fargo 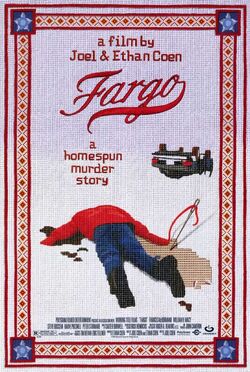 "This is a true story. The events depicted in this film took place in Minnesota in 1987. At the request of the survivors, the names have been changed. Out of respect for the dead, the rest has been told exactly as it occurred."

It is the winter of 1987, and Jerry Lundegaard (Macy), the sales manager at a Minneapolis Oldsmobile dealership, is desperate for money. He floated a $320,000 GMAC loan to cover up his embezzlements from dealership bank accounts, collateralizing it with nonexistent dealership vehicles, and GMAC is asking questions. Dealership mechanic and paroled ex-convict Shep Proudfoot (Steve Reevis) refers him to an old partner in crime, Gaear Grimsrud (Stormare). Jerry travels to Fargo, North Dakota, towing a new car from his dealership's lot, and hires Gaear and Carl Showalter (Buscemi) to kidnap his wife, Jean (Kristin Rudrüd), and extort a ransom from his wealthy father-in-law and boss, Wade Gustafson (Presnell), in return for the dealership car and half of the $80,000 ransom.

Back in Minneapolis, Jerry pitches Gustafson a lucrative real estate deal. Gustafson checks with his accountant, Stan Grossman (Larry Brandenburg), and agrees to front $750,000. Jerry considers calling off the kidnapping, but it is already in motion. Then, he learns that Gustafson and Grossman plan to make the deal themselves, leaving Jerry a paltry finder's fee. At Jerry's home, Carl and Gaear carry out an inept and violent kidnapping. As they transport Jean to their remote cabin hideout on Moose Lake, a state trooper pulls them over outside Brainerd for driving without the required temporary tags over the dealership plates. When the trooper notices a whimpering, blanket-covered body in the back seat, Gaear kills him. Two passing motorists spot Carl disposing of the body; Gaear chases them down and shoots them as well.

The following morning, Brainerd Police Chief Marge Gunderson (McDormand), who is seven months pregnant, initiates a homicide investigation. She learns that the trooper was murdered while ticketing a car with dealership plates; and that the previous night, two men driving a dealership vehicle checked into the local Blue Ox Motel with two call girls, and placed a call to Proudfoot. After questioning the prostitutes (who are of little help), she drives to Gustafson's dealership, where Proudfoot feigns ignorance and Jerry insists none of his cars are missing from the lot. While in Minneapolis, Marge reconnects with Mike Yanagita (Steve Park), an old classmate who takes her to dinner, tells her that his wife, another classmate, has died, and makes an awkward attempt to seduce her.

Jerry informs Gustafson and Grossman that the kidnappers have demanded $1 million, and will deal only through him. Meanwhile, Carl, in light of the unanticipated complication of three murders, demands that Jerry hand over the entire $80,000; and GMAC gives Jerry 24 hours to prove the existence of the nonexistent collateral or face legal consequences.

Carl takes another call girl to see José Feliciano at the Carlton Celebrity Room; afterwards, he is attacked and beaten by a furious Proudfoot for involving him in the murder investigation with his late-night phone call. Carl—bruised, humiliated, and frightened—calls Jerry and orders him to deliver the ransom within 30 minutes. Gustafson insists on making the money drop himself. At the pre-arranged drop point in a Minneapolis parking garage, he tells Carl he will not hand over the money without seeing Jean. An enraged Carl shoots Gustafson, who, before dying, manages to return fire, striking Carl in the jaw. After fleeing the scene, Carl is astounded to discover that Gustafson's briefcase contains far more than the anticipated $80,000. He removes that amount to split with Gaear, then buries the briefcase, intending to return for it later and keep the rest of the money for himself. At the cabin, Gaear—oblivious to Carl's serious gunshot wound—informs Carl that he shot Jean when she "wouldn't stop screaming". Carl says they must part ways and flee the state separately; but after a heated argument over possession of the dealership car, Gaear kills Carl with an axe.

During a phone conversation with a mutual friend, Marge learns that Yanagita's dead wife was never his wife, nor is she dead. Yanagita has been in and out of psychiatric hospitals since high school, and has been stalking the woman for years. Reflecting on Yanagita's convincing lies, Marge returns to Gustafson's dealership. Jerry continues to insist that he is not missing any cars, but offers to inventory the lot anyway. Marge waits—and then, through a window, sees Jerry driving away from the dealership, and calls the State Police. The next morning Marge drives to Moose Lake, on a tip from a local bar owner who reported a "funny-looking guy" bragging about killing someone. Outside a cabin she spots the dealership car she is seeking; nearby, Gaear is feeding Carl's dismembered body into a wood chipper. He tries to escape, but Marge shoots him in the leg and arrests him. Meanwhile, North Dakota police track Jerry to a motel outside Bismarck, where he is arrested while attempting to escape through a bathroom window.

Marge's husband Norm (John Carroll Lynch), whose mallard painting has been selected for a 3-cent postage stamp, complains that his friend's painting will be on the first class (29-cent) stamp. Marge reassures him that lots of people use 3-cent stamps; the two happily anticipate the birth of their child in two months.

Retrieved from "https://movies.fandom.com/wiki/Fargo_(film)?oldid=119782"
Community content is available under CC-BY-SA unless otherwise noted.