Start a Wiki
watch 01:27
The Loop (Movies)
Do you like this video?
Farmageddon: A Shaun the Sheep Movie 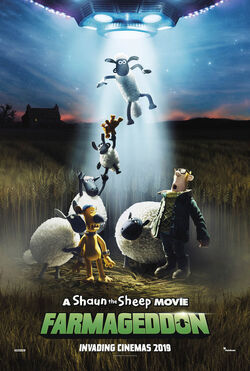 When an impish and adorable alien with amazing powers crash-lands near Mossy Bottom Farm, Shaun soon sees an opportunity for alien-powered fun and adventure, setting off on a mission to shepherd the intergalactic visitor home before a sinister organisation can capture her…can Shaun and the flock avert Farmageddon on Mossy Bottom Farm before it’s too late?

On 14 September 2015, StudioCanal announced it was working with Aardman on a sequel.

Retrieved from "https://movies.fandom.com/wiki/Farmageddon:_A_Shaun_the_Sheep_Movie?oldid=165756"
Community content is available under CC-BY-SA unless otherwise noted.