Moviepedia
Register
Don't have an account?
Sign In
Advertisement
in: 1941 births, Actresses from Florida, American film actresses,
and 16 more 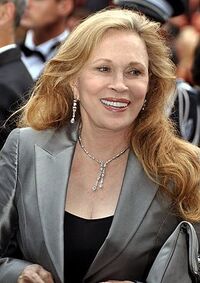 Dorothy Faye Dunaway (born January 14, 1941) is an American actress, best known for her starring roles in films from the 1960s and the 1970s. She is known in such films such as The Thomas Crown Affair, Chinatown, The Towering Inferno, Three Days of the Condor and Network.

Faye Dunaway was born on a farm in Bascom, Florida in 1941, the daughter of Grace April (née Smith), a housewife, and John MacDowell Dunaway, Jr., an army officer. After high school she majored in education at the University of Florida, but switched to theatre arts and transferred to Boston University, earning her degree in 1962. She joined the American National Theatre and Academy in 1961 and did four plays on Broadway over the next three years.