$55 million
Finding Dory is a 2016 computer-animated film produced by Pixar Animation Studios and the sequel to the 2003 Pixar film Finding Nemo. Andrew Stanton, who directed the original film, returns as director. The film was released on June 17, 2016. The characters from the first film appear in the sequel, including the "Tank Gang".

Dory (Ellen DeGeneres) is a wide-eyed, blue tang fish who suffers from memory loss every 10 seconds or so. The one thing she can remember is that she somehow became separated from her parents as a child. With help from her friends Nemo and Marlin, Dory embarks on an epic adventure to find them. Her journey brings her to the Marine Life Institute, a conservatory that houses diverse ocean species. Dory now knows that her family reunion will only happen if she can save mom and dad from captivity.

It was also announced that Nemo and the "Tank Gang" would return, as well as many other original characters from Finding Nemo, in addition to several new ones. It is unknown if Jacques will reappear for the sequel because his voice actor, Joe Ranft, died in a car accident in 2005 during production of Cars.

In 2005, after disagreements between Disney's Michael Eisner and Pixar's Steve Jobs over the distribution of Pixar's films, Disney announced that they would be creating a new animation studio, Circle 7 Animation, to make sequels to the seven Disney-owned Pixar films (which consisted of the films released between 1995 and 2006). The studio had put Toy Story 3 and Monsters, Inc. 2 into development, and had also hired screenwriter Laurie Craig to write a draft for Finding Nemo 2. Circle 7 was subsequently shut down after Robert Iger replaced Eisner as CEO of Disney and arranged the acquisition of Pixar.

In July 2012, it was reported that Andrew Stanton was developing a sequel to Finding Nemo, with Victoria Strouse writing the script and a schedule to be released in 2016. However, the same day the news of a potential sequel broke, director Andrew Stanton posted a message on his personal Twitter calling into question the accuracy of these reports. The message said, "Didn't you all learn from Chicken Little? Everyone calm down. Don't believe everything you read. Nothing to see here now. #skyisnotfalling" According to the report by The Hollywood Reporter published in August 2012, Ellen DeGeneres was in negotiations to reprise her role of Dory. In September 2012, it was confirmed by Stanton saying: "What was immediately on the list was writing a second Carter movie. When that went away, everything slid up. I know I'll be accused by more sarcastic people that it's a reaction to Carter not doing well, but only in its timing, but not in its conceit." In February 2013, it was confirmed by the press that Albert Brooks would reprise the role of Marlin in the sequel.

In April 2013, Disney announced the sequel, Finding Dory, confirming that Ellen DeGeneres and Albert Brooks would be reprising their roles as Dory and Marlin, respectively. Following a long campaign for a sequel on The Ellen DeGeneres Show, DeGeneres stated: "I have waited for this day for a long, long, long, long, long, long time. I'm not mad it took this long. I know the people at Pixar were busy creating Toy Story 16. But the time they took was worth it. The script is fantastic. And it has everything I loved about the first one: It's got a lot of heart, it's really funny, and the best part is—it's got a lot more Dory." In a Los Angeles Times interview, Stanton talked about the sequel's origin: "There was polite inquiry from Disney (about a Finding Nemo sequel). I was always 'No sequels, no sequels.' But I had to get on board from a VP standpoint. (Sequels) are part of the necessity of our staying afloat, but we don't want to have to go there for those reasons. We want to go there creatively, so we said (to Disney), 'Can you give us the timeline about when we release them? Because we'd like to release something we actually want to make, and we might not come up with it the year you want it.'"

The film's ending was revised after Pixar executives viewed Blackfish, a documentary film, which focuses on dangers of keeping orca whales in captivity. Initially, some of the characters would end in a SeaWorld-like marine park, but the revision gave them an option to leave. On September 18, 2013, it was announced that the film would be pushed back to a June 17, 2016 release. Pixar's The Good Dinosaur was moved to the November 25, 2015 slot in order to allow more time for production of the film. under the sea blasting in aquarium grimbsy the pelican

and mosue boy blasting in an australian tail cinemas 1995 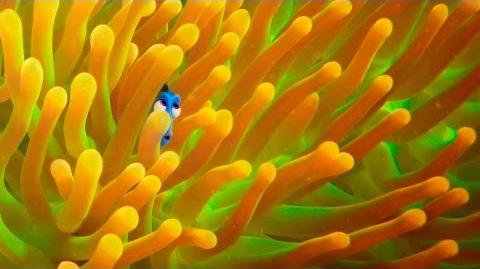 Exclusive! A Brand New ‘Finding Dory’ Trailer
Add a photo to this gallery

Retrieved from "https://movies.fandom.com/wiki/Finding_Dory?oldid=166607"
Community content is available under CC-BY-SA unless otherwise noted.