watch 02:03
Wiki Targeted (Entertainment)
Do you like this video?
Play Sound
Flubber 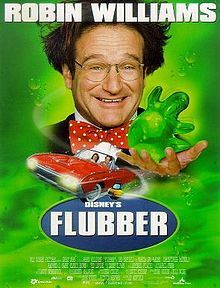 Flubber is a 1997 comedy film and a remake of The Absent-Minded Professor (1961), directed by Les Mayfield (who had previously directed another John Hughes scripted remake, Miracle on 34th Street). The film was produced by Walt Disney Pictures and stars Robin Williams, Marcia Gay Harden, Christopher McDonald, Ted Levine, Jodi Benson and Clancy Brown. Although the film was poorly reviewed, it did well at the box office, making more than double its budget.

Professor Philip Brainard (Robin Williams), a professor at Medfield College, is developing a new energy source in an attempt to raise enough money to save the college from closure. His preoccupancy with his research distracts him from his fiancée and the president of Medfield College Doctor Sara Jean Reynolds (Marcia Gay Harden); he has missed two weddings in the past as a result of this, much to the anger of Sara. On the day of the third attempted wedding, Philip is approached by his former partner Wilson Croft (Christopher McDonald), who has profited from ideas he has stolen from Brainard and now desires to steal Sara from Philip and make her his wife, which he declares directly to Philip. Before he can make it to the wedding, his latest experiment shows fast development, forcing him to miss another wedding. The resulting substance created from the experiment is a green slime that proves to be difficult to control and wreaks havoc on the neighborhood before Brainard finally manages to capture him. Weebo (voiced by Jodi Benson), Philip's robot assistant, classifies the substance as "flying rubber", leading Philip to christen him as "Flubber".

Philip discovers that as he bounces, Flubber increases in speed rather than decreasing. After he relays this information to Weebo, she informs him that he has missed the third wedding. Philip goes to Sara's office and attempts to explain the situation to her, but she thinks he made this up. Meanwhile, Medfield College sponsor Chester Hoenicker (Raymond J. Barry) is unhappy that Philip flunked his son Bennett (Wil Wheaton) in chemistry class. That night, Chester sends his two security guards Smith (Clancy Brown) and Wesson (Ted Levine) to Philip's house in an attempt to persuade Philip into giving Bennett a better grade. However, Philip is too busy testing the Flubber to even notice them and suddenly knocks out unconscious by a Flubber-coated golf ball and bowling ball. He uses Flubber to give his car the ability of flight. During a test run, he discovers Wilson making the moves on Sara. Afterwards, Weebo attempts to confess her love of Philip, only to be shrugged off as a computer. In response, she secretly creates a holographic human version of herself named Sylvia (Leslie Stefanson) in hopes of winning him over. Before Weebo can make out with Philip in this form as he sleeps, Philip awakens with another idea for Flubber. He enters an empty basketball court and tests the effects of Flubber on a basketball. Later, he gives Flubber-padded shoes to the unskilled Medfield basketball team to increase their abilities.

Back in Philip's home, a spiteful Weebo unleashes Flubber from his case, allowing him to dance around the house and cause general mayhem. After the close but successful basketball game, Philip's attempt to win Sara back into his favor fails. Philip dumps all of his emotional baggage onto Weebo, saying his absent-mindedness is due to his love of Sara. Weebo records Philip's ramblings and shows the footage to Sara, who then reconciles with Philip. Philip demonstrates Flubber's abilities to Sara and they discuss how it can be used for profit. However, Chester discovers Flubber's existence and sends Smith and Wesson to break into Philip's house and steal Flubber. Weebo attempts to fend off the goons, only to be struck down with a baseball bat. Philip and Sara return home and find that Flubber is gone and Weebo is destroyed. Philip discovers that Weebo had downloaded back-up data of herself onto Philip's computer in the event of her demise, as well as a video recording of Weebo's hologram telling Philip she loves him.

Philip and Sara confront Chester and try to retrieve Flubber, only to find that Wilson was behind the whole scheme. After a battle, Philip and Sara defeat Wilson, Chester and his goons, get Flubber back, raise enough money to save the college and finally have a successful marriage, along with Flubber and the "daughter" of Weebo, called Weebette.

Many gags are embellishments from the 1961 film, with John Hughes ([Home Alone]]) rewriting the original Bill Walsh screenplay (based on Samuel W. Taylor's short story, A Situation of Gravity). Even though Walsh died in 1975, he received posthumous credit for this script.

Flubber performed well at the box office. It made $92,977,226 in the United States and a total of $85 million in other countries for a total of $178 million internationally.[1]

Despite its success, the film received largely negative reviews. The film holds a 23% approval rating at Rotten Tomatoes based on 31 reviews.[2] Metacritic gives the film a score of 37%. The film was submitted for an Academy Award nomination for Best Visual Effects, but did not get nominated.[3]

Retrieved from "https://movies.fandom.com/wiki/Flubber?oldid=314496"
Community content is available under CC-BY-SA unless otherwise noted.