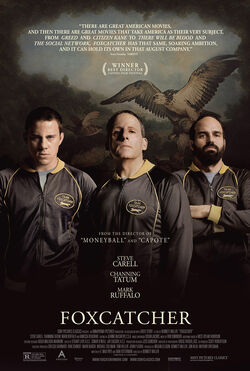 Foxcatcher entered the Palme d'Or in the main competition section at the 2014 Cannes Film Festival, where Miller won the Best Director Award. The film had three Golden Globe Award nominations, including Best Picture. The film was nominated for five Oscars at the 87th Academy Awards, including a Best Actor nomination for Carell, Best Supporting Actor for Ruffalo, and Best Director for Miller. It became the first film to be nominated for Best Director but not Best Picture since 2008, when Julian Schnabel was nominated for The Diving Bell and the Butterfly, two years before the Academy extended its maximum number of Best Picture nominees to 10 films. The film received critical acclaim from critics, who lauded the performances of Carell, Tatum, and Ruffalo, as well as Miller's directing and the film's atmosphere and tone.

Olympic wrestling champion Mark Schultz (Channing Tatum) speaks at an elementary school in place of his older brother, Dave Schultz (Mark Ruffalo). Both are Olympic gold medal-winning wrestlers, but despite his own achievements Mark feels overshadowed by Dave. Mark is contacted by philanthropist and wrestling enthusiast John E. du Pont (Steve Carell), an heir to the E.I. du Pont family fortune, who arranges to fly Mark to his estate in Pennsylvania where du Pont has built a private wrestling training facility. Du Pont then invites Schultz to join his wrestling team, "Team Foxcatcher", to train for the World Championship and be paid. Mark accepts the offer, with du Pont urging him to enlist his brother Dave as well. Dave declines for the sake of his wife and two kids who are settled where they live, so Mark moves to Pennsylvania alone.

Mark stays in a homey guest house ("the chalet") and is greeted there later in the night by du Pont. Through training with his new teammates and du Pont's financial support, Mark excels with Foxcatcher, winning Gold at the 1987 World Wrestling Championships. Du Pont praises him and they develop a kind of friendship. Du Pont introduces Mark to cocaine, which he starts to use regularly. He confides in Mark, whom he now calls a true friend, telling him how his mother, Jean du Pont (Vanessa Redgrave), paid a boy to act as his friend. Jean du Pont tells her son that she believes wrestling is a "low sport" and she doesn't like seeing him be low. One day, Mark and his teammates in Foxcatcher take a morning off from training to watch mixed martial arts (MMA) on TV. Angered by this (as well as Mark's insistence that his brother will not join Team Foxcatcher), du Pont verbally and physically rebuffs him, saying that he'll enlist Dave by any means necessary.

Dave decides to move with his family to Pennsylvania so he can join Foxcatcher. His self-esteem damaged by du Pont, Mark decides to work and train alone, pushing du Pont and even Dave away. As Team Foxcatcher prepares to enter the preliminaries for the 1988 Summer Olympics in Seoul, du Pont's mother is escorted into du Pont's gym to watch him coach his team. He awkwardly demonstrates basic maneuvers for her and the other wrestlers. Jean leaves in disgust after seeing du Pont give his back to his student.

At the 1988 Olympic Trials in Pensacola, Florida, Mark loses his first match. Angered by his failure, Mark destroys his room and goes on an eating binge. Dave manages to break into his room and is alarmed at his brother's condition. They work feverishly so he can make his weight check. As Mark exercises, Dave prevents du Pont from speaking with Mark. Mark competes well enough to win his match and make the Olympic team. Dave notices that du Pont is absent, learning that he left for Pennsylvania after being told his mother died. After returning to the estate, Mark tells Dave that "you and I both know that I can't stay" at Foxcatcher once the Olympics are over and asks Dave to leave with him. A documentary funded by du Pont about his exploits with Team Foxcatcher is made, during which Dave is asked to praise him as coach and mentor. Mark loses his matches in Seoul, after which he leaves Team Foxcatcher. While Dave continues to live at du Pont's estate and train with Foxcatcher, as a condition for his remaining, he negotiates an arrangement with du Pont to continue to support Mark financially.

Later, du Pont is seen sitting alone in his mansion's trophy room watching the documentary about Team Foxcatcher, which ends with Mark complimenting du Pont at a ceremony depicted earlier. du Pont calls his bodyguard and drives to Dave's home, where he finds him in the driveway working on his car radio. As Schultz approaches du Pont's car to greet him, du Pont rolls down his window, pulls out a pistol, asks Dave "Do you have a problem with me?", and shoots him three times at close range. Dave's wife, Nancy (Sienna Miller), calls 911 and as du Pont drives off, she runs outside to mourn her dead husband. Du Pont is later arrested outside his own home and the film ends with Mark as he competes in a cage fighting match with the crowd's cheers ringing in his head.

Director Bennett Miller began developing the project in 2010 after acquiring the rights to the story from Michael Coleman and Tom Heller. Megan Ellison financed the film through her Annapurna Pictures, also producing alongside Miller, Jon Kilik, and Anthony Bregman. Sony Pictures Classics became the distributor, taking over from Sony's Columbia Pictures, which had co-financed the film. Miller said "it's always been my hope and expectation that they (SPC) would distribute the film." Shooting began in the Pittsburgh metropolitan area on October 15, 2012, in and near the suburbs of Sewickley, Pennsylvania, Sewickley Heights, and Edgeworth.

The film received universal acclaim. Rotten Tomatoes gives it a rating of 88% "Certified Fresh" with an average rating of 7.9 based on 209 reviews, with the site's consensus stating: "A chilling true crime drama, Foxcatcher offers Steve Carell, Mark Ruffalo and Channing Tatum a chance to shine -- and all three rise to the challenge". On Metacritic, the film has a score of 81 out of 100, based on reviews from 49 critics, indicating "universal acclaim."

Retrieved from "https://movies.fandom.com/wiki/Foxcatcher?oldid=85858"
Community content is available under CC-BY-SA unless otherwise noted.