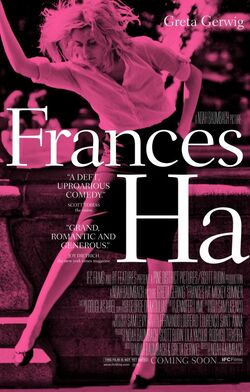 Frances Ha is a 2012 American black and white comedy-drama film directed by Noah Baumbach. The cast of the film consists of Greta Gerwig and Mickey Sumner.

A New York woman (who doesn't really have an apartment) apprentices for a dance company (though she's not really a dancer) and throws herself headlong into her dreams, even as the possibility of realizing them dwindles.