View src
watch 01:33
House of the Dragon Trailer - The Loop
Do you like this video?
Play Sound
Francis Ford Coppola 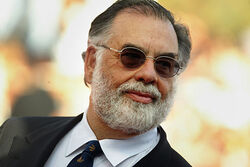 Francis Ford Coppola (born April 7, 1939) is the acclaimed writer/director of The Godfather, Apocalypse Now, and Dracula, among others. He is the uncle of film star Nicolas Cage, whom worked with on Peggy Sue Got Married.

Francis Ford Coppola was born in Detroit, Michigan to Carmine and Italia Coppola. Francis was the second of three children, the youngest being his sister Talia Shire.

He is widely acclaimed as one of Hollywood's most innovative and influential film directors. He epitomized the group of filmmakers known as the New Hollywood, that includes Martin Scorsese, Terrence Malick, Robert Altman, Woody Allen, William Friedkin, Philip Kaufman, and George Lucas who emerged in the early 1970s with unconventional ideas that challenged contemporary film-making.

He co-wrote the script for Patton, which won an Academy Award for Best Writing (Original Screenplay). His directorial fame escalated with the release of The Godfather, a film which revolutionized movie-making in the gangster genre, earning praise from critics and public alike. It won three Academy Awards, including his second, for Academy Award for Best Writing (Adapted Screenplay), and was instrumental in cementing his position as a prominent American film director.

Coppola followed it with a critically successful sequel, The Godfather Part II, which became the first sequel to win the Academy Award for Best Picture. The film was highly praised and won him three Academy Awards—for Best Adapted Screenplay, Best Director and Best Picture. The Conversation, which Coppola directed, produced and wrote, was released that same year, winning the Palme d'Or at the 1974 Cannes Film Festival. He next directed Apocalypse Now (1979); notorious for its overlong and strenuous production, but critically acclaimed for its vivid and stark depiction of the Vietnam War, winning the Palme d'Or at the 1979 Cannes Film Festival. To this day, Coppola is one of only eight filmmakers to win two Palme d'Or awards. He and Michael Haneke are the only two filmmakers to win both in the same decade.

Many of Coppola's ventures in the 1980s and 1990s were critically lauded, but he has never quite achieved the same success as in the 1970s.

He is known to feature family members in his work, including sister Talia, father Carmine and daughter Sofia, who appeared in The Godfather Part III.