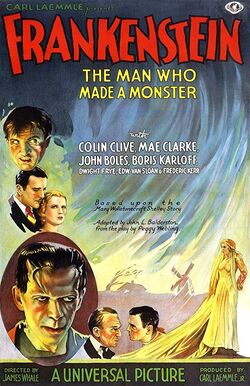 Not rated on its initial release in the United States. Has been rated PG for recent video releases and TV-PG for television broadcasts.
Budget
$291,000 (estimated)
Gross
$12,000,000 (in USA)
Book
Frankenstein

'Frankenstein is a 1931 Universal Pictures horror film directed by James Whale. It stars Boris Karloff as Frankenstein's monster, Colin Clive as the monster's creator Henry Frankenstein and Mae Clarke as Henry Frankenstein's love interest Elizabeth. The script was based on a stage play by Peggy Webling which was itself loosely based on the novel Frankenstein by Mary Shelley. The film was a popular and critical success and spawned several sequels.

Henry Frankenstein (Colin Clive), an ardent young scientist, and his devoted assistant Fritz (Dwight Frye), a hunchback, piece together a human body, the parts of which have been secretly collected from various sources. Frankenstein's consuming desire is to create human life through various electrical devices which he has perfected.

Elizabeth Lavenza (Mae Clarke), his fiancée, is worried to distraction over his peculiar actions. She cannot understand why he secludes himself in an abandoned watch tower, which he has equipped as a laboratory, and refuses to see anyone. She and her friend, Victor Moritz (John Boles), go to Dr. Waldman (Edward Van Sloan), his old medical professor, and ask Dr. Waldman's help in reclaiming the young scientist from his absorbing experiments. Waldman tells them that Frankenstein has been working on creating life. Elizabeth, intent on rescuing Frankenstein, arrives just as Henry is making his final tests. He tells them to watch, claiming to have discovered the ray that brought life into the world. They all watch Frankenstein and the hunchback as they raise the dead creature on an operating table, high into the room, toward an opening at the top of the laboratory. Then a terrific crash of thunder, the crackling of Frankenstein's electric machines, and the hand of Frankenstein's monster (Boris Karloff) begins to move. This causes Frankenstein to shout the film's most famous line, 'It's alive!'

Through Fritz dropping a brain he was stealing and choosing another one, a criminal brain was secured for Frankenstein's experiments which results in the monster knowing only hate, horror and murder. The manufactured monster despite its grotesque form, initially appears not to be a malevolent beast, but a simple, innocent creation. Frankenstein welcomes it into his laboratory, and asks his creation to sit, which it does. He then opens up the roof, causing the monster to reach out towards the sunlight. Fritz, however, enters with a flaming torch which frightens the monster. Its fright is mistaken by Frankenstein and Dr. Waldman as an attempt to attack them, and so it is taken to the dungeon where it is chained. Thinking that it is not fit for society, and will wreak havoc at any chance, they leave the monster locked up where Fritz antagonizes it with a torch. As Henry and Dr. Waldman consider the fate of the monster they hear a shriek from the dungeon. Frankenstein and Dr. Waldman rush in to find the monster has strangled Fritz. The monster makes a lunge at the two but they escape the dungeon, locking the monster inside. Realizing that the creature must be destroyed Henry prepares an injection of a powerful drug and the two conspire to release the monster and inject it as it attacks. When the door is unlocked the creature emerges and lunges at Frankenstein as Dr. Waldman injects the drug into the creature's back. The monster knocks Dr. Waldman to the floor and has nearly killed Henry when the drug takes effect and he falls to the floor unconscious.

Henry leaves to prepare for his wedding while Dr. Waldman conducts an examination of the unconscious creature. As he is preparing to begin dissecting it the creature awakens and strangles him. It escapes from the tower and wanders through the landscape. It then has a short encounter with a farmer's young daughter, Maria (Marilyn Harris), who asks him to play a game with her in which they playfully toss flowers into a lake and watch them float. The monster enjoys the game, but when they run out of flowers, tragedy occurs. Due to his defective brain, the monster thinks Maria (unable to swim) will float as well as the flowers, so he picks her up and throws her into the lake, and the girl drowns. Realizing he has made a terrible mistake, the monster walks away feeling troubled and remorseful. This drowning scene is one of the most controversial in the film, with a long history of censorship.

With preparations for the wedding completed, Frankenstein is once again himself and serenely happy with Elizabeth. They are to marry as soon as Dr. Waldman arrives. Victor rushes in, saying that the Doctor has been found strangled in his operating room. Frankenstein suspects the monster. A chilling scream convinces him that the monster is in the house. When the searchers arrive, they find Elizabeth unconscious on the bed. The monster has escaped. He is only intent upon destroying Frankenstein.

Meanwhile Maria's father arrives carrying the body of his daughter. He says she was murdered, and an enraged band of peasants search the surrounding country for the monster. They are split into three groups, Frankenstein leading one into the mountains. He becomes separated from the band and is discovered by the monster who, after the two stare each other down for a curious moment, attacks him. After a struggle, in which Frankenstein's torch fails to save him, the monster knocks Frankenstein unconscious and carries him off to the old mill. The peasants hear his cries and follow. Finally reaching the mill, they find the monster has climbed to the very top, dragging Frankenstein with him. In a burst of rage, he hurls the young scientist to the ground. His fall is broken by the vanes of the windmill, saving him from instant death. Some of the villagers hurry him to his home while the others remain to burn the mill and destroy the entrapped monster.

Later, back at Castle Frankenstein, Frankenstein's father, Baron Frankenstein (Frederick Kerr) celebrates the wedding of his recovered son with a toast to a future grandchild.

Retrieved from "https://movies.fandom.com/wiki/Frankenstein_(1931)?oldid=187354"
Community content is available under CC-BY-SA unless otherwise noted.