Start a Wiki
watch 01:16
The Loop (Movies)
Do you like this video?
Frankenweenie 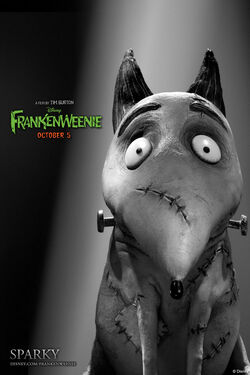 Young filmmaker and scientist Victor Frankenstein (Charlie Tahan) lives with his parents, Edward and Susan Frankenstein (Martin Short and Catherine O'Hara) and his beloved dog, Sparky, in the quiet town of New Holland. Victor's intelligence is recognized by his classmates at school, his somber next-door neighbor, Elsa Van Helsing (Winona Ryder), mischievous, Igor-like Edgar "E" Gore (Atticus Shaffer), obese and gullible Bob (Robert Capron), overconfident Toshiaki (James Hiroyuki Liao), creepy Nassor (also Short), and an eccentric girl nicknamed Weird Girl (also O'Hara), but communicates little with them due to his relationship with his dog. Concerned with his son's isolation, Victor's father encourages him to take up baseball and make achievements outside of science. Victor hits a home run at his first game, but Sparky, pursuing the ball, is struck by a car and killed.

Inspired by his science teacher Mr. Rzykruski's (Martin Landau) demonstration of the effect of electricity on dead frogs, a depressed Victor digs up Sparky's corpse, brings him to his makeshift laboratory in the attic, and successfully reanimates him with lightning. Seeing Weird Girl's living cat, Mr. Whiskers, the undead Sparky escapes from the attic and explores the neighborhood. He is recognized by Edgar, who blackmails Victor into teaching him how to raise the dead. The two reanimate a dead goldfish, which turns invisible due to an error with the experiment. Edgar brags about the undead fish to Toshiaki and Bob, which, in panic of losing the upcoming science fair, inspires them to make a rocket out of soda bottles, which causes Bob to break his arm and Mr. Rzykruski to be blamed and fired due to his accused influencing and reviling the townsfolk for questioning his methods when he steps up for self-defence. So, The Gym Teacher (also O'Hara) replaces Mr. Rzykruski.

Eventually, Edgar's fish disappears when he tries to show it to a skeptical Nassor (who was told by Toshiaki) and when Edgar is confronted by Toshiaki, Nassor, and Bob on the baseball field at school, he accidentally reveals Victor's actions, inspiring them to try reanimation themselves. Victor's parents discover Sparky in the attic no longer dead, and are both shocked and scared. All the commotion frightens Sparky and he flees from the house. Victor arrives home and fails to stop Sparky leaving, he is then left with his parents who reprimand Victor for doing something so serious. They then sympathise with him and offer to help search for Sparky. Meanwhile Victor's classmates invade the now empty lab, discovering Victor's reanimation formula. The classmates separately perform their experiments, which go awry and turn the dead animals into monsters—Mr. Whiskers holds a dead bat while it is electrocuted, turning him into a vampire cat; Edgar turns a dead rat he found in the garbage into a wererat; Nassor revives his mummified hamster Colossus; Toshiaki's turtle Shelley is covered in a growth formula and turns into a giant Gamera-like monster; and Bob's Sea-Monkeys grow into amphibious humanoid monsters. The monsters break loose into the town fair where they wreak havoc.

After finding Sparky by his own grave at the town's pet cemetery, Victor sees the monsters attacking the fair and goes to help his classmates deal with them—-the Sea-Monkeys explode after eating salt-covered popcorn, and Colossus is stepped on by Shelley, while the rat and Shelley are returned to their original, deceased forms after being electrocuted. During the chaos, the town's mayor's niece Elsa van Helsing is grabbed by Mr. Whiskers and carried to the town windmill. The townsfolks blame Sparky for her disappearance and chase him to the windmill, which Mayor Bergermeister (also Short) accidentally ignites with his torch. Victor and Sparky enter the burning windmill and rescue Elsa, but Victor is trapped inside. Sparky rescues Victor, only to be dragged back inside by Mr. Whiskers. A final confrontation ensues, and just as Mr. Whiskers has Sparky cornered, a flaming piece of wood breaks off and impales him. He gives one dying screech and the windmill collapses on Sparky, killing him again. To reward him for his bravery, the townsfolk gather to revive Sparky with their car batteries, reanimating him once more. Persephone, Elsa's pet poodle, who has a hair style similar to the Elsa Lanchester's Bride of Frankenstein, comes to Sparky as the two dogs share their love.

In the lead up to the film's release in October, there will be a travelling art exhibition detailing the work that has gone into creating the film. During the exhibition it will be possible to see sets and characters that were used for the stop motion feature film.

From September 14 to November 5, Disney California Adventure will be offering exclusive scenes from the film during Muppet Vision 3D's nighttime operating hours.

The film was initially set for release in November 2011, before Disney moved it to March 9, 2012. In January 2011, Box Office Mojo announced the film's new release date for October 5, 2012 with John Carter replacing the film for the once planned March 9, 2012 release. The film premiered on September 20, 2012, on the opening night of Fantastic Fest, an annual film festival in Austin, Texas. The film opens the London Film Festival on October 10th in the UK.

327px
Retrieved from "https://movies.fandom.com/wiki/Frankenweenie_(2012)?oldid=132184"
Community content is available under CC-BY-SA unless otherwise noted.