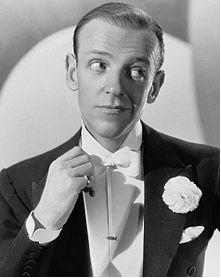 Name
{{{Name}}}
Birthplace
Omaha, Nebraska
Birth date
May 10 1899 - June 27 1987
Occupation
Actor, dancer, singer, choreographer
Active Years
1904 - 1981
Fred Astaire (May 10 1899 - June 27 1987) was an American actor, singer, dancer, and choreographer. In a career that spanned 76 years, in which he made 31 musical fims. He is best known for his partnership with Ginger Rogers, with whom he made 10 films. The American Film Institute ranked him as the fifth greatest male screen legend.

Retrieved from "https://movies.fandom.com/wiki/Fred_Astaire?oldid=130759"
Community content is available under CC-BY-SA unless otherwise noted.