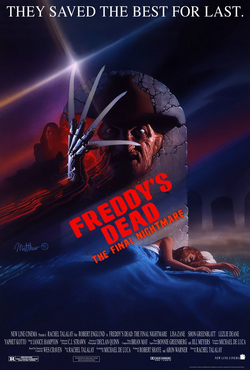 In 1999, Freddy Krueger has returned and killed nearly every child and teenager in the town of Springwood, Ohio, excluding Alice Johnson and her son Jacob, who are revealed to have moved away. The only surviving teenager, known only as "John Doe", finds himself confronted by Freddy in a dream and wakes up just outside the Springwood City limits and does not remember who he is or why he is outside of Springwood.

At a shelter for troubled youth, Spencer, Carlos, and Tracy plot to run away from the shelter. Carlos was physically abused by his parents, resulting in a hearing disability; Tracy was raped by her father; and Spencer was a stoner. John, after being picked up by the police, becomes a resident of the shelter and a patient of Dr. Maggie Burroughs. Maggie notices a newspaper clipping in John's pocket from Springwood. To cure John's amnesia, she plans a road trip to Springwood. Tracy, Carlos, and Spencer stow away in the van to escape the shelter, but they are discovered when John has a hallucination and almost wrecks the van just outside Springwood.

Tracy, Spencer, and Carlos, after trying to leave Springwood, rest at a nearby abandoned house, which transforms into 1428 Elm Street, Freddy Krueger's former home. John and Maggie visit Springwood Orphanage and discover that Freddy had a child. John believes he is the child because Freddy allowed him to live. Back on Elm Street, Carlos and Spencer fall asleep and are killed by Freddy. Tracy is awakened by Maggie, but John, who went into the dream world with Tracy to try to help Spencer, is still asleep. Maggie and Tracy take him back to the shelter. On their way back, Krueger kills John in his dream, but not before revealing that Krueger's kid is a girl. As John dies, he reveals this information to Maggie. Tracy and Maggie return to the shelter, but they discover that no one remembers John, Spencer, or Carlos except for Doc, who has learned to control his dreams. Maggie remembers what John told her and discovers her own adoption papers, learning that she is Freddy's daughter. Her birth name was Katherine Krueger. Her name was legally changed to Maggie Burroughs

Doc discovers Freddy's power comes from the "dream demons" who continually revive him, and that Freddy can be killed if he is pulled into the real world. Maggie decides that she will be the one to enter Freddy's mind and pull him into the real world. Once in the dream world, she puts on a pair of 3-D glasses and enters Freddy's mind. There, she discovers that Freddy was teased as a child, abused by his foster father, inflicted self-abuse as a teenager, and murdered his wife. Freddy was given the power to become immortal from fiery demons. After some struggling, Maggie pulls Freddy into the real world.

Maggie and Freddy end up in hand-to-hand combat against one another. While Maggie continues to battle Freddy, she uses several weapons confiscated from patients at the shelter. Enraged by the knowledge of what he has done, she disarms him of his clawed glove. Eventually, Maggie stabs Freddy in the stomach with his own glove while she is close to him. Tracy throws Maggie a pipe bomb. After she impales Freddy to a steel support beam she throws the bomb in his chest. She says "Happy Fathers Day", kisses him, and runs. The three dream demons fly out of Freddy after the pipe bomb kills him, unable to revive him in the real world. Maggie smiles at Tracy and Doc says, "Freddy's dead".

In the original script of the film, 15-year-old Jacob Johnson (son of the previous installment's main character, Alice Johnson) was the major character while many of the "Dream Warriors" would return to aid Jacob in defeating Freddy after he kills Alice. This idea was later trashed and rewritten into the final script. Peter Jackson also wrote a screenplay, but it was not used; his screenplay was about how Freddy had become seen as such of a low threat that teenagers were now taking sleeping pills just so they could mess with him. A police officer then was to go into a comatose state, thus permanently being in Freddy's realm. Jackson's script was said to be called A Nightmare on Elm Street: The Dream Lover, and the supposed concept was that Freddy had become so weak in the dream world that teens made a game out of going into the dream world and beating up Freddy. But when Freddy regains enough power to take a boy's father hostage in the dream world, the boy must go there one last time to save his dad. In the final draft of the film, Alice and Jacob are seen briefly moving away from Springwood during the montage at the end of the film.

The last ten minutes of the film are in 3-D. The effect was eliminated for the VHS and television releases - with the notable exception of the UK and French rental version and the US Laserdisc version. The DVD box set, released in 1999, includes 2 pairs of 3-D glasses to use with the reinstated effect.

Freddy's Dead: The Final Nightmare made $12,966,525 in the opening weekend, which was the highest opening weekend for the series until the release of Freddy vs. Jason. After its initial run, the film grossed a total of $34,872,033 in the United States, making it the fifth highest-grossing film in the series.

Reviews for the film were generally negative. It currently holds a 21% rating on film review aggregator website Rotten Tomatoes based on 28 reviews. Austin Chronicle wrote, "Freddy Krueger [...] has devolved from the horrific, ill-defined phantasm posited in the original film into a bland and annoyingly predictable boogeyman loved by kids everywhere".

The film was nominated for a Golden Raspberry Award for Worst Original Song for the song "Why Was I Born (Freddy's Dead)".

The soundtrack for the film was released September 24, 1991 by Warner Bros. Records. While not included on the soundtrack, the song "In-A-Gadda-Da-Vida" by Iron Butterfly is featured in the film.

Innovation Comics published a three-issue comic adaptation of the film. An alternate version of the third issue was published in 3-D in order to recreate the effect also used in the film. The series was also published in the trade paperback format. Innovation followed the adaptation with A Nightmare on Elm Street: The Beginning. The three-issue mini-series served as a direct sequel to Freddy's Dead: The Final Nightmare, as Maggie Burroughs continues to have nightmares of her father Freddy Krueger, following the events of the film. Traveling back to Springwood with Tracy, another survivor from the film, Maggie researches Freddy's life leading up to his death at the hands at of the Springwood parents. Only the first two issues of the series were released before Innovation Comics declared bankruptcy, leaving the third issue still unpublished and the story incomplete. Series writer Andy Mangels has since made the original script for issue number three available on his website.

Retrieved from "https://movies.fandom.com/wiki/Freddy%27s_Dead:_The_Final_Nightmare?oldid=200811"
Community content is available under CC-BY-SA unless otherwise noted.