Reggie the Turkey has always been afraid of Thanksgiving because turkeys have always been on the menu. However, his attempts to warn his farm based flock constantly fall to deaf ears and has made him an outcast. When the other turkeys finally realize what's going on, they throw Reggie outside in an attempt to save themselves. In a surprise twist of fate, he ends up being named the "pardoned turkey" by the President of the United States and is taken to Camp David. Although initially hesitant, Reggie soon eases into a routine of doing nothing but enjoying pizza and watching telenovelas.

However, Reggie gets kidnapped by Jake, the president and the only member of Turkey Freedom Front. Jake tells him that a "Great Turkey" told him to find Reggie and take him back to the first Thanksgiving with him to take turkeys off the menu once and for all. Despite interference by federal officials and several attempts by Reggie to trick him back to the surface, Jake manages to commandeer an egg-shaped time machine controlled by a AI named S.T.E.V.E. and takes Reggie with him back to the same day in 1621. Once there, they are immediately attacked and separated by colonial hunters led by Myles Standish but are quickly rescued by native turkeys led by Chief Broadbeak and his two children, Hunter and Jenny, the latter of whom Reggie is immediately smitten with. Broadbeak explains that the turkeys in the area have been forced underground since the settlers came and that they can't risk fighting back without the settler taking them.

The next day, Broadbreak has Jake go with Hunter to spy on the settlers with Reggie and Jenny spring all the hunting traps they've set up. Despite initial hostility, Hunter and Jake find out that the settlers have already begun preparations for Thanksgiving as well as where they hold their weapons. Meanwhile, Jenny, who believes Reggie is making up being from the future, is impressed with his unorthodox way of springing the traps put by the settlers. However, they are soon intercepted by Standish and Reggie is forced to get her in orbit over the planet aboard S.T.E.V.E., validating everything he said in the process. Reggie tries to convince Jenny to go back to the future with him once everything blows over, but she tells him she can't bring herself to leave the flock no matter how much she likes him.

Jake drags Reggie away from Jenny and tells him he has a plan to attack the settlers. However, Reggie has gotten sick of all his unproved stories and threatens to leave. Desperate, Jake tells him that this trip was more about him making up for him not being able to save three turkey eggs while escaping a turkey fattening facility when he was younger, although still maintaining that the Great Turkey convinced him to go through with this. While still reluctant to believe what he said, Reggie sill goes along with the plan. They manage to use gunpowder to destroy the weapons shack, but Jake inadvertently leaves a gunpowder trail back to the tree the turkeys are hiding under. Standish and his men flush the turkeys out from underground, capturing enough for the feast and killing Broadbeak in the ensuing panic. Jenny is named the new chief and orders the remaining turkeys to prepare an attack on the settlers. Despite Jake's attempts to get him to stay, a heartbroken Reggie heads back to the present.

Once back at Camp David, Reggie is confronted by multiple future versions of himself. Through the awkward conversation, Reggie discovers that he is the Great Turkey, having used S.T.E.V.E. to throw his voice and appearance. Inspired, Reggie goes back in time to stop the attack, trapping Standish in a hole in time in the process. Through S.T.E.V.E. and Pizza Dude from the start of the film, Reggie convinces the settlers and the arriving Indians that pizza is a more acceptable meal than turkeys, taking them off the meal entirely. In the end, Reggie decides to stay with Jenny and get married while Jake leaves in S.T.E.V.E. to search for new adventures. However, Jake returns moments after leaving and implies that their antics have caused the future to be thrown out of whack.

Development on the film, originally titled Turkeys, began in June 2009 and physical production began in January 2011. John Kricfalusi was involved in early development, and posted the concepts he created for the film on his blog. Reel FX and Granat Entertainment launched in 2010 Bedrock Studios (later renamed to Reel FX Animation Studios) to produce sub $35 million family oriented projects.

Ash Brannon was then set to direct the film, but in October 2012, when it was announced that Relativity Media would co-finance, co-produce, and distribute the film, Jimmy Hayward took over the directing position. In March 2013, the film was retitled to Free Birds.

Free Birds was originally scheduled for November 14, 2014, but in February 2013 the film's release moved up a year to November 1, 2013, due to the vacant slot left after the delay of Mr. Peabody & Sherman.

Free Birds was critically panned. Rotten Tomatoes reports 19% approval rating with an average rating of 4.27/10 based on 89 reviews. Metacritic calculated a score of 38 out of 100 based on 27 reviews. 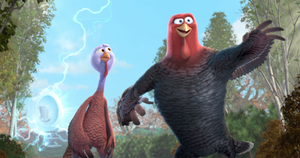 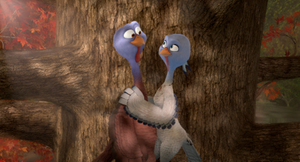 Retrieved from "https://movies.fandom.com/wiki/Free_Birds?oldid=262318"
Community content is available under CC-BY-SA unless otherwise noted.