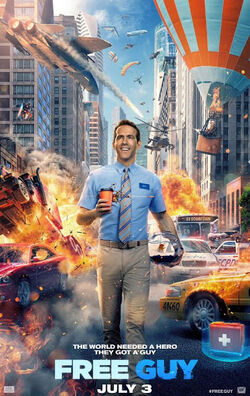 In the open world video game Free City, Guy is a non-player character working as a bank teller. Thanks to a code developed by programmers Milly and Keys inserted into Free City by the publisher Antoine, Guy becomes aware of his world being a video game, and takes steps to make himself the hero, creating a race against time to save the game before the developers can shut it down.

Retrieved from "https://movies.fandom.com/wiki/Free_Guy?oldid=301379"
Community content is available under CC-BY-SA unless otherwise noted.