watch 01:38
The Loop (Movies)
Do you like this video?
From Here to Eternity 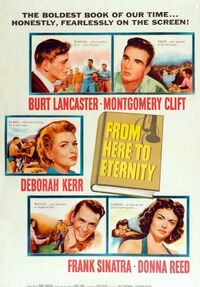 From Here to Eternity is a 1953 drama film directed by Fred Zinnemann and based on the novel of the same name by James Jones. It deals with the troubles of soldiers, played by Burt Lancaster, Montgomery Clift, Frank Sinatra and Ernest Borgnine, stationed on Hawaii in the months leading up to the attack on Pearl Harbor. Deborah Kerr and Donna Reed portrayed the women in their lives.

Retrieved from "https://movies.fandom.com/wiki/From_Here_to_Eternity_(1953)?oldid=257435"
Community content is available under CC-BY-SA unless otherwise noted.