watch 03:27
Wiki Targeted (Entertainment)
Do you like this video?
Play Sound
From Up on Poppy Hill 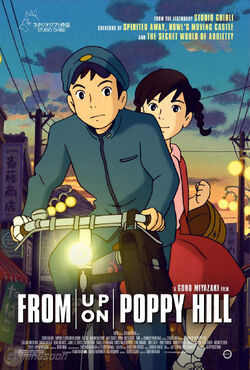 Set in 1963 Yokohama, Japan, the film tells the story of Umi Matsuzaki, a high school girl living in a boarding house, Coquelicot Manor. When Umi meets Shun Kazama, a member of the school's newspaper club, they decide to clean up the school's clubhouse, Quartier Latin. However, Tokumaru, the chairman of the local high school and a businessman, intends to demolish the building for redevelopment and Umi and Shun, along with Shirō Mizunuma, must persuade him to reconsider.

From Up on Poppy Hill premiered on July 16, 2011 in Japan. The film received positive reviews from most film critics and grossed $61 million worldwide. An English version of the film was produced by GKIDS; it was released to theaters on March 15, 2013 in North America.

The setting is Yokohama in 1963, and the filmmakers lovingly bring to life the bustling seaside town, with its misty harbor, sun-drenched gardens, shops and markets, and some of the most mouthwatering Japanese home-cooking set to film. The story centers on an innocent romance beginning to bud between Umi and Shun, two high school kids caught up in the changing times. Japan is picking itself up from the devastation of World War II and preparing to host the 1964 Olympics - and the mood is one of both optimism and conflict as the young generation struggles to throw off the shackles of a troubled past. While the children work together to save a dilapidated Meiji era club house from demolition, their tentative relationship begins to blossom. But - in an unexpected twist that parallels what the country itself is facing - a buried secret from their past emerges to cast a shadow on the future and pull them apart.

The Blu-ray+ DVD combo and DVD releases of FROM UP ON POPPY HILL contain over three hours of bonus materials and include: original Japanese language and English language versions with subtitles and dubtitles; feature-length storyboards; celebrity cast recording featurette with behind-the-scenes footage and interviews; an interview with Goro Miyazaki; original Japanese trailer and TV spots; the music video for the theme song by Aoi Teshima; and a featurette about Yokohama, exploring the history of the sea-side setting where the film takes place. Bonuses exclusive to the Blu-ray edition include a staff speech and press conference by Hayao Miyazaki days after the Fukushima earthquake; and a 20-page booklet containing the original project proposal by Hayao Miyazaki and a letter from Goro Miyazaki.

Retrieved from "https://movies.fandom.com/wiki/From_Up_On_Poppy_Hill?oldid=108951"
Community content is available under CC-BY-SA unless otherwise noted.