Princess Elsa of Arendelle possesses magic that allows her to create ice and snow, often using it to play with her younger sister, Anna. After Elsa accidentally injures Anna with her magic, their parents, the King and Queen, take both siblings to a colony of trolls led by Grand Pabbie. He heals Anna, but alters her memories to remove traces of Elsa's magic, warning Elsa that she must learn to control her powers or people will persecute her. The King and Queen isolate both sisters within the castle and reduce the staff. Elsa shuts Anna out, creating a rift between them. Elsa spends her days suppressing her power other than mastering them, causing her to become more insecure. By the time the sisters are teenagers, their parents went on an oversea trip, and they got caught in a storm and presumed dead.

When Elsa turns 21, she is to be crowned queen of Arendelle. She is uneasy that the kingdom's citizens may find out about her powers, and keeps her gloves on. The castle gates open to the public and visiting dignitaries for the first time in years. Among them are the devious Duke of Weselton, and the dashing Prince Hans of the Southern Isles, the latter of whom Anna falls in love with at first sight. Elsa's coronation happens without a hitch, but she still remains distant from Anna. When Hans proposes to Anna, Elsa objects that it's unwise to marry someone from first meeting. Anna and Elsa get into an argument and grabs one of her gloves, Elsa snaps and unleashes her powers before the court; the Duke brands her a monster. Elsa flees to the North Mountain, where she builds a palace of ice in which to live a hermit life finding it fascinating to how much she is capable of. In the process, however, her unveiling magic engulfs Arendelle in an eternal winter.

Anna ventures out to find Elsa and end the winter, leaving Hans in command, but his horse ditches her. She gets lost, collecting supplies at Wandering Oaken's shop. She meets an ice harvester named Kristoff and his reindeer, Sven, convincing them to take her to the mountains. An attack by wolves leads to Kristoff's sleigh being destroyed. On foot, they meet Olaf, a cheerful snowman brought to life unknowingly by Elsa, who offers to lead them to her. Anna then remembers Olaf was part of her childhood with Elsa from when they used to play. When Anna's horse returns to Arendelle, Hans sets out to find Anna and Elsa, accompanied by the Duke's followers, who have secret orders to kill Elsa.

Reaching the ice palace, Anna meets Elsa, but when she reveals what has become of Arendelle, Elsa becomes upset saying that she cannot undo it, and accidentally freezes Anna's heart. She then makes a giant snow monster named Marshmallow, who chases Anna, Kristoff, and Olaf away. Anna's hair begins turning white, so Kristoff takes her to meet the trolls, his adoptive family. Grand Pabbie tells Anna will freeze solid unless "an act of true love" reverses the spell. Hans and his men reach Elsa's palace, defeating Marshmallow and capturing Elsa. Kristoff races Anna back home so Hans can give her true love's kiss. Anna is delivered to Hans but, he refuses to help her! Hans felt unappreciated for being twelfth-in-line of his throne, and he actually has been plotting to seize the throne of Arendelle by taking advantage of Anna for being so desperate for love, and use the task of Elsa dooming herself, eliminating both sisters. Hans locks Anna in a room to die, and then manipulates the dignitaries into believing that Elsa killed her and was entrusted with the kingdom. He orders the queen's execution, only to discover she has escaped her detention cell. Sven urges Kristoff to go back to Anna.

Olaf frees Anna, and they venture into the blizzard outside to meet Kristoff, whom Olaf reveals is in love with her. Hans confronts Elsa outside, claiming that she killed Anna, causing Elsa to break down. Anna spots Hans is about to kill Elsa; she leaps in the way and freezes solid, stopping Hans. Devastated, Elsa hugs and mourns over her sister, who thaws out, her heroism constituting "an act of true love." Realizing ‘love’ is the key to controlling her magic; Elsa ends the winter and gives Olaf his own snow flurry to survive the warmer climate. Both Hans and the Duke are arrested and exiled from the kingdom. Anna gives Kristoff a new sleigh, and the two kiss. Elsa transforms the courtyard into an ice rink and Elsa promises never to lock the castle gates again.

Walt Disney Animation Studios has been working on its own adaptation of The Snow Queen, most recently after being scrapped in late 2002. However, as of March 2010, Disney had shelved the project again. As of June 2010, Disney announced that the film was put on "hold." In December 2011, following the success of Tangled (formerly Rapunzel), Disney announced a new title for the film, Frozen, and a release date, November 27, 2013. A month later, it was confirmed that the film will be a 3D CGI animated feature. On March 5, 2012, it was announced that actress Kristen Bell will provide her voice to the lead character; Chris Buck will be directing, with John Lasseter and Peter Del Vecho producing. In June 2012, it was announced that Bell will voice Anna, a young dreamer, and that Idina Menzel will voice Elsa the Snow Queen. The songs will be written by Broadway composers Robert Lopez and his wife Kristen Anderson-Lopez. This is the plot according to Disney D23: "In order to stop the spell which has trapped the kingdom in eternal winter, Anna teams up with Kristoff, a mountain man, and goes on a journey to find the Snow Queen, all while encountering Everest-like extremes, mystical creatures and magic." On November 30, 2012, it was announced that Jennifer Lee, one of the screenwriters of Wreck-It Ralph, has joined Buck as co-director. On December 19, 2012, it was announced that Jonathan Groff will voice the role of Kristoff.

Original songs for Frozen were written and composed by Robert Lopez and Kristen Anderson-Lopez. At D23's Destination D event in August 2012, a song called Let It Go was performed as a preview. The song is performed by Idina Menzel as Elsa, when she leaves the kingdom and creates her own ice palace. In February 2013, it was reported that Christophe Beck has been hired to score the film. 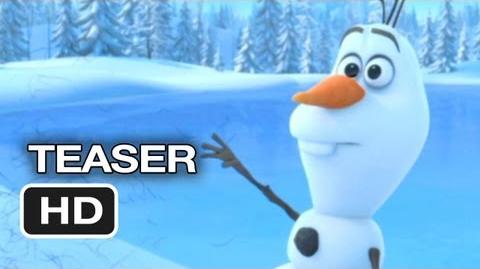