This marks the final film appearance of Paul Walker who died on November 30, 2013, while the film was in production. After Walker's death, filming was delayed for script re-writes and his brothers Caleb and Cody were used as stand-ins to complete his remaining scenes. Furious 7 was released first in Australia on April 2, 2015, and then in the United States on April 3, 2015, and was released in 3D internationally, a first for the series. Upon release, the film became a massive critical and commercial success, with much of the praise being aimed at the film's visuals, acting, action sequences and its tribute to Paul Walker.

After defeating Owen Shaw and his crew and securing their amnesties, Dominic Toretto, Brian O'Conner, and the rest of their crew are able to return to the United States and live normal lives again. Brian begins to accustom himself to life as a father, while Dom tries to help Letty regain her memories by taking her back to Race Wars and to her old grave. Meanwhile, Owen's older brother Deckard breaks into the secure hospital the comatose Owen is being held in and swears vengeance against Dom, before breaking into Luke Hobbs' DSS office to extract profiles of Dom's crew. After revealing his identity, Shaw engages Hobbs in a fight, and escapes when he detonates a bomb that sends Hobbs and his partner, Elena Neves, flying from the building and onto the roof of a car. Severely injured, Hobbs is rushed to the hospital by Elena. Dom later learns from his sister Mia that she is pregnant again and convinces her to tell Brian about it, despite her objections. However, a bomb, disguised in a package sent from Tokyo, explodes and destroys the Toretto house just seconds after Han, one of their crew, is killed by Shaw in Tokyo. Dom later visits Hobbs in hospital, where he learns that Shaw is a rogue special forces assassin seeking to avenge his brother. Dom then travels to Tokyo to claim Han's body, where he meets Sean Boswell, a friend of Han's, who gives him personal items found at Han's crash, including a cross necklace that Dom had attempted to find for Letty.

Back at Han's funeral in Los Angeles, Dom notices a car observing and chases after the vehicle, driven by Shaw. After a head-on collision in a game of chicken, both prepare to fight but Shaw slips away when a covert ops team arrives, led by Frank Petty. Petty informs Dom that he will assist him in stopping Shaw if he helps him prevent a mercenary named Jakande from obtaining God's Eye, a computer program that can use digital devices to track a specific person, and save its creator, a hacker named Ramsey, from Jakande's men. Dom recruits Brian, Letty, Roman Pearce and Tej Parker to help him. However, Brian makes a promise to Mia that after Shaw is dealt with, he will dedicate himself to raising their son full-time. To rescue Ramsey, the team airdrops their cars over the Caucasus Mountains, ambushes Jakande's convoy and rescues Ramsey. They then head to Abu Dhabi, where a billionaire has acquired the flash drive containing God's Eye. At the Etihad Towers, the team breaks into his penthouse and manages to steal the flash drive. On both occasions, the team is pursued by Shaw, who engages in combat with Dom, and the team barely manages to escape alive. With God's Eye, the team manages to track down Shaw, who is waiting at a remote factory. Dom, Brian, Petty and his covert ops team attempt to capture Shaw, but are ambushed by Jakande and his militants, who have allied with Shaw. In the ensuing battle, Petty's men are killed and Petty is injured, though he manages to escape with Dom and Brian while Jakande obtains God's Eye from one of Petty's men, and he is eventually evacuated by helicopter. Left with no other choice, the team decides to return to Los Angeles to fight Shaw, Jakande and his men on their home turf. Dom plans to confront Shaw alone while Brian and the rest of the crew prepare to deal with Jakande and regain control of God's Eye. At the same time, Mia reveals to Brian that she is pregnant with their second child, a girl.

While Jakande pursues Brian and the rest of the crew with a stealth attack helicopter and unmanned aerial vehicle, using God's Eye to track down Ramsey, the team uses Ramsey to hack into God's Eye while sharing her mobile between their vehicles. Hobbs, seeing the team in trouble, breaks out of hospital and destroys the UAV by ramming it with an ambulance. After Brian manages to manually reroute the program's signal, Ramsey successfully completes the hack, regains control of God's Eye and shuts it down. Meanwhile, Dom and Shaw engage in a one-on-one brawl on a parking garage, before Jakande intervenes and attacks them both, and Shaw is apprehended when part of the parking garage collapses on him. Dom then engages in battle with Jakande and launches his vehicle at his helicopter with him in it, narrowly missing, but successfully manages to toss a bag of grenades on board, before getting himself injured when his car lands and crashes. Hobbs then shoots the bag of grenades from ground level, destroying the helicopter and killing Jakande. When Dom remains unconscious, the team fears that he is dead. As Letty cradles Dom's body in her arms, she reveals that she has regained her memories. Dom regains consciousness soon after, remarking, "It's about time".

Later, Shaw is taken into custody by Hobbs and locked away in a secret, high-security CIA prison. Meanwhile, at a beach, Brian and Mia play with their son while Dom, Letty, Roman and Tej observe, appreciating their happiness and acknowledging that Brian is better off retired with his family. Dom silently leaves, and Brian catches up to him at a stop sign. As Dom remembers the times that he has had with Brian, they bid each other farewell and drive off in separate directions. 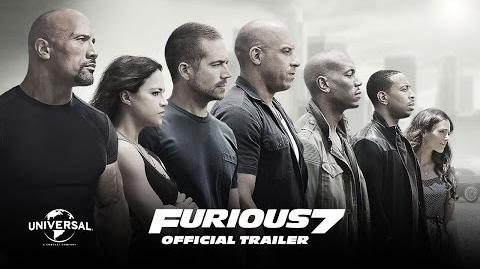 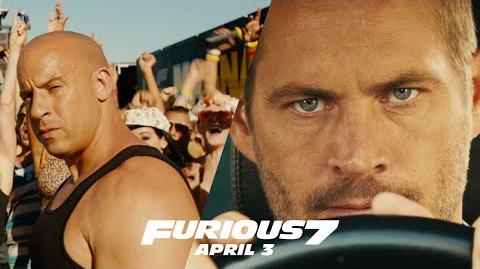 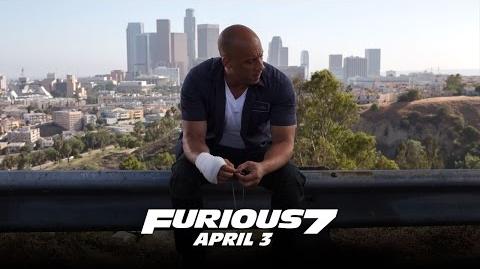 The film has received positive reviews. The Los Angeles Times reported that reviews for Furious 7 have been "generally positive" with critics praising the film's action sequences and for its poignant tribute to Walker. The review aggregator website Rotten Tomatoes reported an 81% "Certified Fresh" approval rating with an average rating of 6.7/10 based on 267 reviews. The site's consensus reads, "Serving up a fresh round of over-the-top thrills while adding unexpected dramatic heft, Furious 7 keeps the franchise moving in more ways than one."

On Metacritic, which assigns a normalized rating, the film has a score of 67 out of 100, based on 44 critics, indicating "generally favorable reviews". In CinemaScore polls conducted during the opening weekend, cinema audiences gave Furious 7 an average grade of A on an A+ to F scale.