watch 00:59
The Loop (Movies)
Do you like this video?
Galaxy Quest 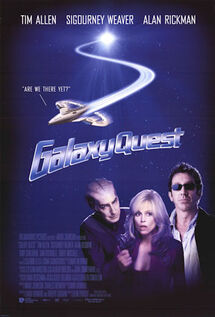 The movie is features the washed-up stars of a fictional 1978–1982 TV series called Galaxy Quest (a parody of the original Star Trek series).

The movie won the Hugo Award for Best Dramatic Presentation in the year 2000, beating the four other nominees: Being John Malkovich, The Iron Giant, The Matrix, and The Sixth Sense.

Portions of the movie were filmed in Goblin Valley State Park, Utah, USA.

The DVD release of the film included an alternate audio track in which dialogue from the film is overdubbed with alien gibberish.

Between 1978 and 1982, the adventures of the crew of the NSEA Protector thrilled audiences of Galaxy Quest, a Star Trek-like cult science-fiction television show. Unfortunately for the actors playing that crew, it's eighteen years later, and they're now washed-up has-beens, reduced to convention appearances and store grand-openings to pay the bills. Variously resentful, embittered, and resigned about their fates, the only one who gains any sort of pleasure out of the adoration aimed at them by their doting fans is Jason Nesmith, the egomaniacal star and 'Commander' of the crew, who laps up their enthusiasm — yet even he is unhappy, deep down, aware that he is resented by his other stars and largely considered a laughing stock by the wider population.

At one convention, Jason is approached about what he thinks is a personal solo appearance for an amateur episode by a group of even-more-unusual-than-usual fans; everything goes as expected (although for an amateur effort Jason is shocked by the high production values) until, having cursorily ordered the destruction of the video representation of the 'evil alien overlord' Sarris, he leaves—and when he finds himself shooting through the galaxy in a gelataneous transportation suit, only then does he realise that he really was in outer space. It transpires that the 'fans' are Thermians, a peaceful and naive alien race who, having received twenty-year old transmissions of Galaxy Quest (among other shows such as Gilligan's Island) from Earth, have interpreted the show as 'historical documents' and have structured their entire society around the 'teachings' of the show, going so far as to build an exact replica of the Protector.

Jason, naturally, loves the idea of being the hero to a real alien race, and ropes his reluctant fellow actors into joining him as his 'crew'. Unfortunately, just as the Protector is real, so are the dangers it must face—and Sarris, not just a special effect, is a terrifyingly real nemesis, an evil and ruthless warlord engaged in a genocidal war of annihilation with the Thermians. The actors, in order to help their alien friends, must therefore adopt their roles on the show for real.

The movie parodied everything from the technology of Star Trek to the Star Trek fan conventions. The parody is mostly friendly (some Star Trek fans refer to it good-humoredly as "the best Star Trek movie ever made") and was widely appreciated by science fiction fans.

As an acknowledged homage to Star Trek, there are a variety of correspondences between the world of Galaxy Quest and the world of Star Trek. The television program within the film, Galaxy Quest, is set around the starship NSEA Protector, an instrument of the National Space Exploration Administration: thinly veiled replicas of the USS Enterprise and Starfleet, respectively.

This homage even extended to the original marketing of the movie, including a promotional website intentionally designed to look like a poorly constructed fan website, with "screen captures" and poor HTML coding. This was in imitation of the countless similar websites devoted to Star Trek.

Despite the overarching similarities to Star Trek, the film has more original dramatic and comedic merit than many spoof comedies. For instance, Mel Brooks' Spaceballs, while a broad-hitting spoof of mostly Star Wars, with a few jabs at Star Trek, may deliver less to a viewer not already familiar with Star Wars. Conversely, most of the plot, themes, and subplots of Galaxy Quest can be followed and appreciated by those who know little to nothing about Star Trek, although Trekkies will usually either have a richer appreciation or a deeper dissatisfaction with the film, as a neutral response may be difficult to find in such circles.

Ironically, GQ has made its own small but devoted fandom.

(Fred sniffs the air and then takes a few breaths)
Fred: "Seems okay."

Retrieved from "https://movies.fandom.com/wiki/Galaxy_Quest?oldid=129021"
Community content is available under CC-BY-SA unless otherwise noted.