Start a Wiki
watch 01:27
The Loop (Movies)
Do you like this video?
Gambit 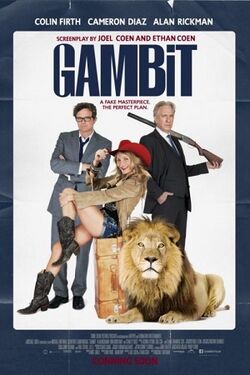 Gambit (2013) is a remake of the 1966 film of the same name which starred Shirley MacLaine and Michael Caine. It is directed by Michael Hoffman, and was adapted by Ethan and Joel Coen. The remake stars Colin Firth, Cameron Diaz, Alan Rickman, Tom Courtenay, Stanley Tucci, and Cloris Leachman, and is currently set for release October 12, 2013.

Centers on British art curator Harry Deane (Colin Firth) who devises a finely-crafted scheme to con England's richest man and avid art collector, Lionel Shabandar (Alan Rickman), into purchasing a fake Monet painting. In order to bait his buyer, he recruits a Texas rodeo queen (Cameron Diaz) to cross the pond and pose as a woman whose grandfather liberated the painting at the end of WWII.[1]

Retrieved from "https://movies.fandom.com/wiki/Gambit?oldid=119613"
Community content is available under CC-BY-SA unless otherwise noted.