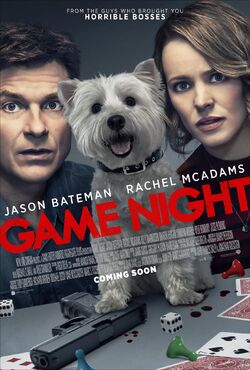 The film was released in the United States on February 23, 2018 by Warner Bros. Pictures.

Married competitive gamer couple Max and Annie are trying to have a child, but their attempts are unsuccessful due to Max's stress surrounding his feelings of inadequacy when compared to his successful, attractive brother Brooks. During Max and Annie's routine weekend game night with their friends Ryan, and married couple Kevin and Michelle, Brooks shows up Max by arriving in a Corvette Stingray (Max's dream car) and sharing an embarrassing childhood story about Max. Brooks offers to host the next game night at a house he is renting while he is in town. Meanwhile, Max and Annie are trying to keep their game nights secret from their neighbor Gary, an awkward police officer left distraught after his divorce from their friend Debbie.

When the guests, including Ryan's new date, Sarah, arrive at Brooks' house the following week, Brooks says he has initiated an interactive role-playing mystery game, promising the winner his Stingray. A man dressed as an FBI agent bursts into the home and informs them of the narrative of the mystery, only for two masked men to break in and assault him and Brooks. The guests believe the assault is part of the game. After Brooks is dragged out of the house, the couples begin to solve the mystery using the clues left behind by the actor.

Using his GPS location, Max and Annie track Brooks down to a seedy bar and, using a pistol left behind by Brooks during the struggle (which they believe to be fake), manage to take the keys to the storage closet, where Brooks is being held. After Annie mistakenly fires the gun and shoots Max in the arm, confirming the weapon is real and that they are in actual danger, the three escape. Brooks admits that he actually makes his living buying and selling illegal items on the black market, in particular a Fabergé egg sought by a man known only as the Bulgarian and owned by a man using the alias Marlon Freeman. With his captors in pursuit, Brooks exits the moving car to guarantee Max and Annie's escape.

Eventually, the others learn what they have become involved in, avoiding police because of Brooks' warnings. Trying to determine the identities of the Bulgarian and Marlon Freeman, they show up at Gary's house, under the false pretense of a game night, in order to use his police computer, where Max discovers the address of Marlon Freeman (real name: Donald Anderton). The group leaves Gary's house and arrives at Anderton's address, where he is hosting an underground fight club. As the others search the house, Ryan spots the egg in a wall safe and is caught trying to steal it. The group escapes with the egg, but accidentally break it. They discover the egg is a worthless fake, but end up finding a list of names that was stored inside of it, realizing this was what the Bulgarian wanted.

The group finds Brooks and his captors on an under-construction bridge and move in to rescue him. Before the captors are able to kill them, the group is saved by Gary, who is then shot in the chest. Max and Annie try to encourage him to pull through by promising to invite him to every future game night. Gary then reveals that he faked the entire scenario in an attempt to trick them into letting him join game night again. He is, however, unaware of the egg, and they are immediately attacked by the real Bulgarian, who captures Brooks after he swallows the list, revealed to be people in the witness protection program. Max and Annie use Brooks' Corvette to drive to the airport and stop the Bulgarian from taking off with Brooks in his jet. They knock the Bulgarian out, tie him up, and free Brooks.

Three months later, Brooks, now under house arrest for his crimes, has managed to sell the list for $3 million (having also tipped off the witnesses for $20 thousand each). Meanwhile, Annie has finally become pregnant. While the group (including an inept Gary) are continuing their game night, men with guns get ready to storm the building.

Post-credits, Gary's intricate plan for his re-institution into game night is shown. He has collected a series of ID cards featuring the friend group, one of which shows that Ryan is a Harvard alumnus. A running joke through the film is that Michelle had sex with someone whom she thought was Denzel Washington. A post-credits scene shows a flashback of Gary's ex-wife Debbie meeting Kenny (not Denzel) at a gas station.