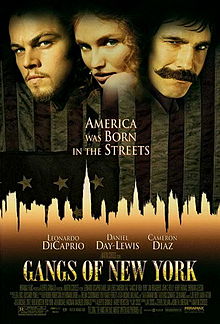 Gangs of New York is a 2002 American epic period drama film set in the mid-19th century in the Five Points district of New York City. It was directed by Martin Scorsese and written by Jay Cocks, Steven Zaillian, and Kenneth Lonergan. The film was inspired by Herbert Asbury's 1928 nonfiction book, The Gangs of New York. It was made in Cinecittà, Rome, distributed by Miramax Films and nominated for numerous awards, including the Academy Award for Best Picture.

The film begins in 1846 and quickly jumps to 1862. The two principal issues of the era in New York were Irish immigration to the city and the Federal government's execution of the ongoing Civil War. The story follows Bill "The Butcher" Cutting (Daniel Day-Lewis) in his roles as crime boss and political kingmaker under the helm of "Boss" Tweed (Jim Broadbent). The film culminates in a violent confrontation between Cutting and his mob with the protagonist Amsterdam Vallon (Leonardo DiCaprio) and his immigrant allies, which coincides with the New York Draft Riots of 1863.

Retrieved from "https://movies.fandom.com/wiki/Gangs_of_New_York?oldid=179504"
Community content is available under CC-BY-SA unless otherwise noted.