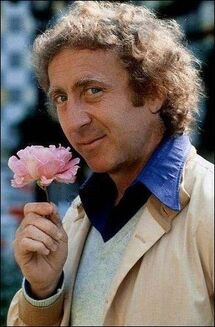 Wilder first started performing on stage. He made his big screen debut in the TV series, Armstrong Circle Theatre in 1962. His first major movie roll was as Leopold Bloom in the 1968 film The Producers where he was nominated for an Academy Award for Best Supporting Actor. This was the first of a series of collaborations with writer/director Mel Brooks including the 1974's Young Frankenstein, a script which garnered the pair an Academy Award nomination for Best Adapted Screenplay. Wilder was known for his role as Willy Wonka in Willy Wonka & the Chocolate Factory and for his four films with Richard Pryor in: Silver Streak (1976), Stir Crazy (1980), See No Evil, Hear No Evil (1989), and Another You (1991). Wilder has directed and written several of the films he has starred in including, The Woman in Red (1984).

He was married to actress Gilda Radner before here death of ovarian cancer leading to his active involvement in promotion cancer awareness and treatment helping found the Gilda Radner Ovarian Cancer Detection Center in Los Angeles and co-founding Gilda's Club.

Since his most recent contribution to acting in 2003, Wilder turned his attention to writing/producing a memoir in 2005, Kiss Me Like A Stranger: My Search for Love and Art, and the novels My French Whore (2007), The Woman Who Wouldn't (2008), and What Is This Thing Called Love (2010).

Gene Wilder is the son of William J. and Jeanne (Baer) Silberman. He adopted the name "Gene Wilder" for his professional name because, "I had always liked Gene because of Thomas Wolfe's character Eugene Gant in Look Homeward, Angel and Of Time and the River. And I was always a great admirer of Thornton Wilder." Wilder first became interested in acting at age 8 when his mother was diagnosed with rheumatic fever and the doctor told him to "try and make her laugh".

Wilder died on August 29, 2016, at age 83 from complications of Alzheimer's disease.