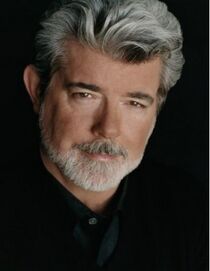 George Walton Lucas, Jr. (born May 14, 1944) is an American film director, producer, and screenwriter. He is most famous for his epic Star Wars saga, the Indiana Jones franchise, and his collaborative work with director and friend Steven Spielberg.

He was born in Modesto, California and went to the Thomas Downey High School, where he was an uninterested student with dreams of becoming a professional race car driver. He later matriculated at Modesto Junior College, where he earned an AA degree, then transferred to the University of Southern California's School of Cinema-Television where he made a number of short films, including an early version of THX 1138, which later became his first full-length feature film.

Later he co-founded the studio American Zoetrope with fellow Francis Ford Coppola, hoping to create a liberating environment for filmmakers to direct outside the controlling Hollywood studio system. After the financial success of his films American Graffiti (1973) and Star Wars Episode IV: A New Hope (1977), Lucas was able to set up his own studio, Lucasfilm, in Marin County in his native northern California. Skywalker Sound and Industrial Light and Magic, the sound and visual effects subdivisions of Lucasfilm, respectively, have become among the most respected firms in their fields.

Star Wars Episode IV: A New Hope is considered by some to be the first "high concept" film, although others feel the first was Steven Spielberg's Jaws, released two years prior. Lucas and Spielberg had been acquaintances for some time and eventually worked together on several films, notably the first Indiana Jones vehicle, Raiders of the Lost Ark in 1981.

On a return on investment basis, Star Wars Episode IV: A New Hope proved to be one of the most successful films of all time. During the filming of Star Wars Episode IV: A New Hope, Lucas waived his up front fee as director and negotiated to own the licensing rights—rights which the studio thought were nearly worthless. This decision earned him hundreds of millions of dollars as he was able to directly profit from all the licensed games, toys and collectibles created for the franchise. In 2004 Forbes Magazine estimated Lucas' personal wealth at $3 billion. In 2005 Forbes.com estimated the lifetime revenue generated by the Star Wars franchise at nearly $20 billion.

Lucas was fined by the Directors Guild of America for refusing to have a standard title sequence in his Star Wars films. After paying the fine, he quit the guild. This made it hard for him to find a director for some of his later projects. According to some, he wanted his friend Spielberg to direct some of the later Star Wars movies, but as a member of the guild Spielberg may have been unable to do so. Spielberg has repeatedly stated that Lucas consciously did not let him direct any Star Wars films, despite the fact that Spielberg wanted to. Other directors Lucas pursued to aid him were David Lynch and David Cronenberg, both of whom declined.

On October 3, 1994, Lucas started to write the three Star Wars prequels, and on November 1 that year, he left the day-to-day operations of his filmmaking business and started a sabbatical to finish the prequels.

The American Film Institute awarded Lucas its Lifetime Achievement Award for 2005. He received the award on June 9, 2005.

Besides his directorial and production work on movies, Lucas is the most significant contemporary contributor to modern movie technology. In 1975 Lucas established Industrial Light and Magic (ILM) in Van Nuys, CA, which was responsible for the invention of the special computer assisted camera crane "Dykstraflex" (named after special effects innovator, John Dykstra) that was used for most of the space fight sequences used in the Star Wars movies (technology which was later adopted by most other visual effects production units, such as those responsible for Battlestar Galactica and Star Trek: The Next Generation). Through ILM, Lucas spurred the further development of computer graphics, film laser scanners and the earliest use of 3D computer character animation in a film, Young Sherlock Holmes. Lucas sold his early computer development unit to Steve Jobs in 1986, which was renamed Pixar.

Lucas is also responsible for the modern sound systems found in many movie theaters. Though Lucas didn't invent THX, he is responsible for its development. The acronym ostensibly stands for "Tomlinson Holman eXperiment" after its chief engineer, however, it is obviously a reference to Lucas' first film.

Now Lucas is spearheading digital cinematography for movies. Though personal digital photography is now mainstream, most movie studios still use traditional cameras and film for movie production. Lucas departed from this model by filming Star Wars Episode II: Attack of the Clones almost completely digitally. He showed the result to a select audience of the Hollywood elite, before the movie's general release. For the presentation, Lucas used a special digital projection system. The attendees said the movie had the clearest and sharpest presentation they had ever seen.

Despite the successful demonstration of the technology, movie studios are slow to move to this new model, in part because of the high price of the digital equipment. ControversyEdit

Being the creator of an extremely popular work (Star Wars), Lucas has undergone severe criticism from Star Wars fans when he has gone back and altered Star Wars. This first occurred with the Star Wars 1997 special editions, which primarily consisted of cosmetic changes, but had some controversial elements such as the anti-hero Han Solo shooting in self-defense instead of in aggression. It occurred again with the 2004 DVD release of the original trilogy.

In addition, the mixed reviews and an increased level of vocalized disappointment by some fans relating to the Star Wars Prequel Trilogy films have greatly stoked the debate concerning Lucas' treatment of certain characters and concepts in comparison to the 1977-1983 Star Wars films.

The frequency and vehemence of debates on these issues has led to the identification of extremists within debates as Lucas Bashers and Lucas Gushers, for anti-Lucas and pro-Lucas fans respectively.

Changes Lucas personally made to THX 1138 for its 2004 DVD release further re-enforced criticism from fans who felt that he was spoiling the integrity of his original films.

Lucas is also viewed by some to be anti-union. He dropped his membership in the directors guild when they fined him $250,000 for the fact that Star Wars had no opening credits. He subsequently filmed the remaining Star Wars films primarily outside of the United States, and primarily with non-union crew.

These anti-union allegations, however, have been contradicted by major national unions. The AFL-CIO awarded Lucas with the Top Labor Management Award in 2002.

Retrieved from "https://movies.fandom.com/wiki/George_Lucas?oldid=83122"
Community content is available under CC-BY-SA unless otherwise noted.