Moviepedia
Register
Don't have an account?
Sign In
Advertisement
in: 2003 films, Direct-to-video sequel films, Films distributed by The Walt Disney Company,
and 10 more

George of the Jungle 2 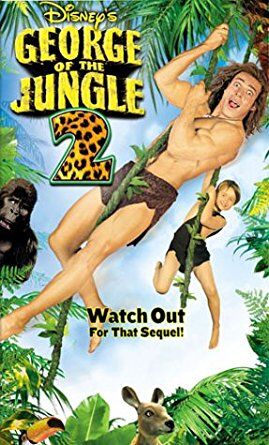 George of the Jungle 2 is the 2003 direct-to-video sequel of the 1997 Disney film George of the Jungle. It was directed by David Grossman, written by Jordan Moffet, and stars Thomas Haden Church, Julie Benz, Christina Pickles, Angus T. Jones, Michael Clarke Duncan, John Cleese, and introducing Christopher Showerman as "George". The movie focuses on George trying to save Ape Mountain from his evil nemesis Lyle (Thomas Haden Church). The sequel was widely panned.

Five years after socialite Ursula Stanhope left civilization to marry George of the Jungle, George finds himself hard-pressed to fulfill the roles of jungle king, father, and husband. George's stress level increases when the "Mean Lion" challenges him for leadership of the jungle, and when Ursula's mother Beatrice teams up with Ursula's ex-fiancé, Lyle, in a plot to forcibly take away all that George holds most dear.

To do this, Beatrice invites Ursula, George, and George Junior to visit Las Vegas, which they accept. Throughout the visit, Beatrice and some of Ursula's fellow socialites try constantly to convince Ursula that George is unworthy of her affection. George, observing the threats but not his wife's resistance, begins to think himself unworthy of Ursula.

During the same time, George's mentor Ape has become a gambler and is in debt to several creditors, including Lyle. Lyle, having learned that Ape does not possess the exploitation rights of Ape Mountain, engages Ape as a staged song performer and steals the deed from George's wardrobe. He thereafter sends agents who are called Sally and Kowalski to Ape Mountain, where they begin to demolish the jungle. The animals, terrified, turn to the Lion for guardianship.

Having failed to convince Ursula to divorce George, Beatrice hires a master of hypnosis to suppress Ursula's memory of having known George. The hypnotist suppresses the memory, replacing it with the idea that Ursula has married Lyle. George, upon learning of this, leaves his luck-charm with Ursula as she sleeps, then departs. He rescues Ape and leaves Las Vegas. Their departure triggers much commotion when the police force and the Animal Control Agency join forces to recapture them.

In San Francisco, Lyle fails to persuade Ursula that he is worthy of her affection. Ursula's memory, meanwhile, is stimulated by events similar to those in which George had played a major part.

Later, George then tries to reconnect with Ursula and George Junior before leaving to rescue the jungle. He has trouble convincing her that he is her husband. Knocking her unconscious, George continues his journey back home with her, Ape, George Junior, and Rocky the kangaroo. In the jungle, George overthrows the Mean Lion and tries to convince the other animals to join him in stopping the diggers, but fails in gaining their lost trust in him until the diggers become an immediate threat. George defeats the bulldozers with the help of George Junior, Ape, Shep, Rocky and Tookie Bird.

Lyle's agents Sally and Kowalski come to destroy the tree house, only to be defeated by George and Rocky. George is unable to defeat the digging machine until his son joins the fray. Lyle and Beatrice arrive to pick up Ursula and George Junior. George manages to defeat both of them by hanging Lyle in a tree and Beatrice is kissed by Ape. Lyle is angered by his defeat and insults the narrator voice, who replies by pulling him from the story's world. Buster kisses Babs, restoring her full memory of him. They are subsequently re-married and learn to find balance among his duties.

Disney released George of the Jungle 2 direct-to-video on October 21, 2003.[1] A week prior to release, Caterpillar Inc. sued Disney over concerns that the film's use of its trademark constituted damage to its reputation. Caterpillar Inc. asked for a restraining order to prevent the release,[2] but they were unsuccessful.[3]

Rotten Tomatoes, a review aggregator, reports that 20% of five surveyed critics gave the film a positive review; the average rating was 5/10.[4] Joe Leydon of Variety wrote, "One of the finest and funniest made-for-video sequels ever released on the Disney label offers an unusually satisfying mix of kid-friendly broad comedy and knowing pop culture parody."[5] Michael Rankins of DVD Verdict wrote that the film "delivers cheap, fluffy, mostly painfree chuckles" and suggested that people watch Jay Ward's cartoons instead.[6]Aaron Beierle of DVD Talk rated the film 2/5 stars and wrote, "Although not quite the dreadful affair that most will be expecting from this kind of a direct-to-video effort, there's simply not much story for the film to go on and the only witty moments are provided by the narrator".[7]