Start a Wiki
watch 01:27
The Loop (Movies)
Do you like this video?
Geri's Game 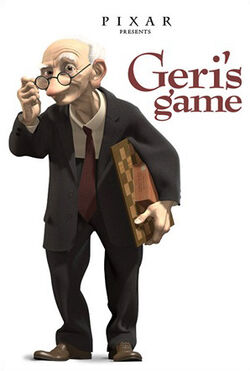 Geri's Game is a 1997 American computer-animated short film written and directed by Jan Pinkava and produced by Pixar. It was released 8 years after the release of the 1989 short, Knick Knack, made as a part of an effort to reignite the studio's series of short films, which was put on standby in the early 90s in order to focus efforts on the creation of the studio's first feature film and the first-ever full-length computer animated film, Toy Story. The short, which follows an old man who competes with himself at a game of chess, was Pixar's first short to feature a human being as its main character. A dedicated research and development group worked alongside the filmmakers to devise ways to get around the burdens of animating a human character, with an in-house simulator mimicking the natural movements of clothing on a character. Subdivision surfacing, a modeling technique pioneered by Catmull, was used to give the character natural movement and realistic skin textures. Geri's Game premiered on November 24, 1997, winning an Academy Award for Best Animated Short Film the following year. It was later shown with the theatrical release of Pixar's 2nd feature film, A Bug's Life.

In an empty park during fall, the title character, Geri (voiced by Bob Peterson), is an elderly man who plays a game of chess against himself, "becoming" each of the players in turn by moving to the other side of the chessboard, where he changes his personality and either puts on or takes off his glasses to show this change. As the chess game progresses, it seems as though there are two people playing chess; at one point, the hands of both "opponents" are seen within the frame. Geri's aggressive alter ego soon gains the upper hand over Geri, capturing every one of his pieces except for his king and queen. Just one false move on the king, and his queen is captured and he can't move his king, putting him in check. However, Geri outsmarts himself by faking a heart attack to distract himself and spinning the board around. While his alternate self is still distracted, Geri checkmates what is now his opponent's king. Finding that he is now the one who is losing and realizing what has happened, Geri begrudgingly resigns the game and hands over a set of false dentures as the prize. Geri then puts them into his mouth, chuckling and basking in his victory as he sits by himself, while the camera pulls back to reveal him alone at the chessboard.

Geri's Game was Pixar's first original short film since their 1989 short, Knick Knack. It was directed and written by Jan Pinkava, who joined the studio in 1993 to work on their TV commercials while the other directors and writers were pro-occupied with the full-length film, Toy Story, and had been continuously approaching executive producer Darla K. Anderson with the proposal that the studio make another new short film. Work on the short began shortly after the release of Toy Story and during early production of A Bug's Life, when Ed Catmull decided that the studio should resurrect its short films program as a way to both bring new animators and storytellers onto Pixar and as a way to further push research and development for the studio. For the first of these shorts, which would be the first one Pixar had made in 8 years, Catmull wanted Pixar to create a story which featured a human as its central protagonist. Upon Anderson's suggestion, he reached out to Pinkava to direct the short. According to Pinkava, Catmull told him that he could direct the short as long as it, along with starring a human character, had a serviceable story behind it.

When trying to brainstorm a concept, Pinkava asked himself if he would be able to come up with a story which featured only one character, which both gave it an artistic edge and made development easier on the technical side of things as coming up with just a single stylized but credible human character was hard enough. He designed an elderly character- the polar opposite age sector of Timmy, the infant character in Tin Toy and one of Pixar's earliest attempts at creating a human character- as he felt it would be interesting to animate a character with the body language of an old man, similarly to how Timmy was animated with the gesticulation of a baby. After spending time storyboarding and brainstorming ideas, Pinkava came up with three different concepts starring the elderly character; one of these concepts was about him playfully riding up and down an elevator, while another one involved him playing a game of chess with himself. The latter idea was inspired by Pinkava and his elderly relatives' love of chess—particularly his grandfather, an avid chess player who would often play rounds of the game with himself. Pinkava pitched an early animatic version of the chess story, and was turned down and given a second chance to restart and further develop the story. After giving a second pitch with a more structured plot, the project was green-lit and Karen Dufilho was issued to produce the project.

Pinkava, who grew up in Czechoslovakia, was inspired by the workings of Czech filmmaker and storywriter Jiří Trnka, particularly his stop motion puppet films; Trnka's characters, usually human ones, were marionette puppets that had vastly stylized body and facial features, which Trnka similarly applied to Geri's character design with aspects such as his nose and his chin. Pinkava did several maquettes of different design Geri before settling on his final appearance, which he then sculpted into a 3D clay model that was baked by Jerome Ranft and digitally scanned into Pixar's animation software. Ranft initially was the clay sculptor for the character, working on his head and his hands, but after receiving continuous suggestions on how to tweak the model, he reportedly handed the sculpting utensil to Pinkava, simply telling him "You do it" while smiling. Geri's voice was provided by Pixar writer Bob Peterson.

Catmull wanted Pixar to be able to create a short that could technologically push the studio to new heights- specifically, by creating one which featured a character who could display both convincing-looking skin and realistic cloth animation. The first Pixar short film with a human main character, Geri's Game was produced with the goal of "[taking] human and cloth animation to new heights". To achieve the goal of producing a believable 3D human character, two people were brought on to do research for the project- Michael Kass, who did calculations behind the physics for a dynamic cloth system, and Tony DeRose, who made use of subdivision surfaces, a rendering tactic invented by Catmull in conjunction with Silicon Graphics founder Jim Clark which allowed for more lifelike rendering of skin textures. Previously, most 3D character surfaces were crafted using several Non-uniform rational B-splines (NURBS) that were stitched together, which made for less expressive movement and caused models to frequently tear. The use of subdivision surfacing, which rendered a character's skin as one large surface, allowed for smoother object movement, as well as allowing for more intricate detail. DeRose had previously brought the technology to other investors, who were ultimately unconvinced and held their faith in NURBS, before bringing it to Pixar to larger receptivity. After toiling endlessly, Kass managed to create a system which could emulate the movement of cloth, at which point the team realized that the jacket they had modeled didn't fit with Geri's movement outside of a default T-pose. According to Pinkava, Steve Jobs, while hearing about the issue, had offered to help him by enlisting tailor Giorgio Armani to help them design an outfit for Geri, which he ultimately declined. The advent of a dynamic cloth animator made several changes to the way that animators could work; for instance, the animation, when completed, needed to be sent to the simulator, which would automatically insert Geri's jacket and calculate it's movements, rather than being directly sourced to the renderer after being finished. Geri also needed to be animated 30 frames in advance in order to get the simulation going, and animators couldn't "cheat" by having off-camera body parts go unanimated, as it would affect how the simulator moved the clothing. Like other Pixar shorts, Geri's Game contains no spoken dialogue, driven only by the actions and expressions of its main character. To further push the ability to convey the film's story, extra detail was put into Geri's facial rigging, with rigger Paul Aichele giving the character hundreds of face controls for animators to use compared to previous rigging tactics. These new and more detailed rigging methods went on to be used in A Bug's Life, which was being worked on at the same time as the film was.

Like previous short films made by Pixar, Geri's Game was made by a temporary branch of Pixar employees, separately from the people working on the studio's films. It took roughly a year to produce, according to Pinkava, largely due to the amount of time allotted to developing the cloth simulation. While the short was being made, most of Pixar Studios was preoccupied with making A Bug's Life. Despite this, several Pixar employees contributed, with 18 different animators working on the project (including Pixar storywriter Pete Docter, who contributed a few scenes out of sheer interest). Despite having been busy directing A Bug's Life, John Lasseter suggested adding a scene in which Geri checks with his own alter ego to make sure he's alright after having a heart attack and falling over, physically staging out the entire scene to Pinkava.

Geri's Game premiered on November 24, 1997 at Laemmle's Monica Theater in Santa Monica, California. It was also attached to the theatrical release of A Bug's Life in 1998 and subsequently featured on that film's VHS and DVD releases. A VHS recording of the short film was released in 1998, but it was not widely available and is considered rare. Geri's Game is on the DVD Pixar Short Films Collection, Volume 1. It was also released on super-8 film with stereo sound.

Retrieved from "https://movies.fandom.com/wiki/Geri%27s_Game?oldid=131832"
Community content is available under CC-BY-SA unless otherwise noted.