Start a Wiki
Get Carter 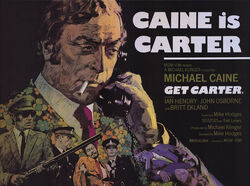 Get Carter is a 1971 British crime film, directed by Mike Hodges and starring Michael Caine as Jack Carter, a gangster who sets out to avenge the death of his brother.

Hodges's first directorial job, the film was based on the 1969 novel Jack's Return Home, and the screenplay was written by the author Ted Lewis and by Hodges. The film went from novel to finished film in just eight months, with location shooting in Newcastle and Gateshead lasting just forty days. The film was produced by Michael Klinger and released by MGM.

As well as Caine, the film gave roles to the playwright John Osborne, Ian Hendry, Bryan Mosley, George Sewell and Geraldine Moffat among others, with cameos by Dorothy White as the doomed Margaret, and Britt Ekland. The distinctive music in the film was composed by Roy Budd, a jazz and "easy listening" specialist, who worked well outside his previous boundaries for this film. The much admired theme tune features the sounds of Caine's train journey from London to Newcastle. All the music was played by Budd and two other jazz musicians — Geoff Cline and Chris Careen.

Jack Carter is a Northern gangster based in London. As the film opens he travels to Newcastle, his childhood home, to attend the funeral of his brother, Frank Carter. Although Frank was supposedly killed in a drunken car accident, Jack quickly comes to suspect foul play; his subsequent revenge is unrelenting and brutal, played out against a bleak industrial backdrop of docks, slag heaps and car parks.

Get Carter was remade in a 2000 film of the same title, with Sylvester Stallone playing the main part; Michael Caine had a significant cameo. The newer version was poorly received as a pointless travesty of the original.

Wikiquote has a collection of quotations from or about:
Get Carter

Retrieved from "https://movies.fandom.com/wiki/Get_Carter_(1971)?oldid=173365"
Community content is available under CC-BY-SA unless otherwise noted.