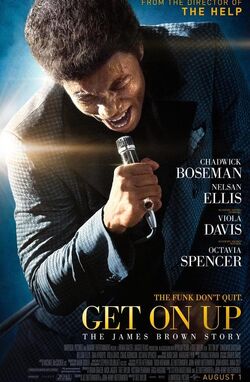 Get on Up is an American biographical drama film about the life of singer James Brown directed by Tate Taylor and written by Jez and John-Henry Butterworth. The film stars Chadwick Boseman as Brown, Nelsan Ellis and Tika Sumpter. The film is set for an August 1, 2014 release date.

On October 22, 2012, it was announced that Tate Taylors is set to direct the untitled biopic about James Brown along with Mick Jagger and Imagine Entertainment's Brain Grazer as producers. The film is set to be shot in Mississippi.

On August 29, 2013, Universal Pictures set October 17, 2014 as a release date for the film Get On Up, previously untitled. Later on November 13 Universal shifted the release date of the biopic from October to August 1, 2014.

On August 26, 2013 Universal Studios added Chadwick Boseman to play the lead role of James Brown. On September 17, Universal announced an open casting call for actors, musicians and extras for different roles in the biopic, which held on September 21. Later on September 30, Taylor added Viola Davis to play Susie Brown and Octavia Spencer to play Aunt Honey. On October 21, Nelsan Ellis joined the cast of the film to portray Famous Flame Bobby Byrd, Brown's longtime friend. Lennie James joined the cast on October 23, to play the role of Brown's father Joseph "Joe" James. On October 24, Universal added James DuMont to cast the film to play a USO envoy named Corporal Dooley. On October 30, 2013 Kirk Bovill also joined the cast of the film. Jill Scott and Dan Aykroyd was added to cast in Get on Up on October 31, Scott will play Brown's wife while Aykroyd will play Ben Bart the President of one of New York's largest talen agencies Universal Attractions Agency. On November 3, Universal added Keith Robinson in the film to portray the role of Baby Roy, a member of Brown's band. On November 14, Tika Sumpter also joined the cast to play a role of a singer Yvonne Fair. There was a rumor that Taraji P. Henson may join the film to play Tammi Terrell. Nick Eversman joined the cast on November 19, to play Mick Jagger. On December 9, 2013, it became public that Brandon Mychal Smith was selected to portray Brown's musical idol Little Richard. On December 20, Josh Hopkins joined the film to portray the role Ralph Bass, a music producer. After the shooting wrapped up in Natchez, MS, the production was looking for extras to begin shoot on January 6, 2014, they will film a concert scene that'll be set in Paris in 1971. There was again a call on January 6, 2014 for extras to film some daytime's scenes in Jackson on January 7, 2014.

The shooting began on November 4, 2013 in Natchez, Mississippi and will be shot in and around Natchez through the end of the year and then move to Jackson, Mississippi. On December 20, 2013 the film wrapped up shooting in Natchez, crews are set to take holidays break and then back to filming from January 6, 2014 to January 24, 2014, in Jackson.

The filming got on track again on January 6, 2014 in Jackson. On January 13, 2014 press posted the news that the crews has filmed some largest scenes at Thalia Mara Hall, and they will also shoot other scenes at Mississippi Coliseum, Capitol Street and some of the restaurants in Jackson.

Retrieved from "https://movies.fandom.com/wiki/Get_on_Up?oldid=169845"
Community content is available under CC-BY-SA unless otherwise noted.