Moviepedia
Register
Don't have an account?
Sign In
Advertisement
in: Film articles without a specified rating, Films, 1984 films,
and 20 more

Ghostbusters II
Ghostbusters (also know as Ghostbusters I or Ghostbusters 1) some times spelled Ghost Busters is a 1984 American supernatural comedy film directed and produced by Ivan Reitman and written by Dan Aykroyd and Harold Ramis. It stars Bill Murray, Aykroyd, and Ramis as three eccentric parapsychologists in New York City who start a ghost-catching business. Sigourney Weaver and Rick Moranis co-star as a potential client and her neighbor. The Ghostbusters business booms after initial skepticism, but when an uptown high-rise apartment building becomes the focal point of spirit activity linked to the ancient god Gozer, it threatens to overwhelm the team and the entire world.

Originally intended by Aykroyd as a project for himself and fellow Saturday Night Live alumnus John Belushi, the film had a very different story during initial drafts. Aykroyd's vision of "Ghostmashers" traveling through time, space and other dimensions to fight large ghosts was deemed financially impractical by Reitman. Based on the director's suggestions, Aykroyd and Ramis finalized the screenplay in May–June 1982. They had written roles specifically for Belushi, John Candy and Eddie Murphy, but were forced to change the script after Belushi died and the latter two actors would not commit to the film.

Ghostbusters was released in the United States on June 8, 1984. It was a critical and commercial success, receiving a positive response from critics and audiences and grossing US$238 million in the United States and more than $291 million worldwide. It was nominated for two Oscars at the 57th Academy Awards for Best Visual Effects and Best Original Song (for the eponymous theme song), but lost to Indiana Jones and the Temple of Doom and The Woman in Red respectively. The American Film Institute ranked Ghostbusters 28th in its AFI's 100 Years...100 Laughs list of film comedies. The film launched the Ghostbusters media franchise, which includes a 1989 sequel, Ghostbusters II; two animated television series, The Real Ghostbusters and Extreme Ghostbusters; and several video games. There is also a 2016 reboot titled Ghostbusters again.

Misfit parapsychologists Peter Venkman (Bill Murray), Raymond Stantz (Dan Aykroyd) and Egon Spengler (Harold Ramis) are called to the New York Public Library after a series of apparent paranormal activities, where they encounter the ghost of a dead librarian, but are frightened away when she transforms into a horrifying monster.

After losing their jobs at Columbia University, the trio establish a paranormal extermination/investigations service known as "Ghostbusters". They develop high-tech equipment capable of capturing ghosts and open their business in a disused, run-down firehouse. At the Sedgewick Hotel, they capture their first ghost and deposit it in a specially built "containment unit" in the firehouse basement. Paranormal activity then begins to increase in New York City. The Ghostbusters become celebrities by containing it, but are increasingly overworked and hire a fourth member, Winston Zeddemore (Ernie Hudson).

The Ghostbusters are retained by Dana Barrett (Sigourney Weaver), whose apartment is haunted by a demonic spirit, Zuul, a demigod worshipped as a servant to Gozer the Gozerian, a Sumerian shape-shifting god of destruction. Venkman takes a particular interest in the case, and competes with Dana's neighbor, Louis Tully (Rick Moranis), for her affection. As the Ghostbusters investigate, Dana is possessed by Zuul, which declares itself the "Gatekeeper", and Louis by a similar demon called Vinz Clortho, the "Keymaster". Both demons speak of the coming of the destructive Gozer, and the Ghostbusters take steps to keep the two apart. Thereafter, the Ghostbusters' office is visited by Walter Peck (William Atherton), a lawyer representing the EPA. He has the team arrested for operating unlicensed waste handlers and orders their ghost containment system to be deactivated, causing an explosion that releases hundreds of captured ghosts. Freed from the Ghostbusters' custody, Louis/Vinz advances toward Dana/Zuul's apartment while the escaped ghosts wreak havoc throughout the city.

Consulting blueprints of Dana's apartment building, the Ghostbusters learn that mad doctor and cult leader Ivo Shandor, claiming humanity was too sick to survive after World War I, designed the building as a gateway to summon Gozer and bring about the end of the world. The Ghostbusters are released from custody to combat the paranormal activity, but after reaching the roof of Dana's building, they are unable to prevent the arrival of Gozer, who initially appears as a woman (Slavitza Jovan). Briefly subdued by the team, Gozer disappears, but her voice echoes that the "destructor" will follow, taking a form chosen by the team. Stantz inadvertently recalls a beloved corporate mascot from his childhood—"something that could never, ever possibly destroy us"—whereupon the destructor arrives in the form of a giant Stay Puft Marshmallow Man and begins attacking the city. To defeat it, the team combine the energy streams of their proton packs (which Egon advised against earlier) and fire them against Gozer's portal to our world. The resulting explosion defeats Gozer/The Stay Puft Marshmallow Man, and frees Dana and Louis from their possessor demons. As hundreds of New Yorkers wipe themselves of marshmallow goo, the Ghostbusters are welcomed on the street as heroes. 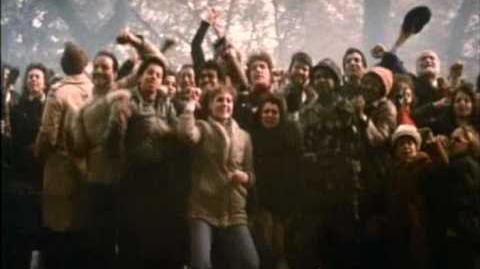