watch 01:45
The Loop (Movies)
Do you like this video?
Play Sound
Ghostbusters: Afterlife 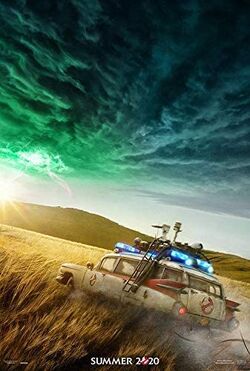 Ghostbusters: Afterlife is an upcoming film directed by Jason Reitman and written by Reitman and Gil Kenan. The cast consists of Carrie Coon, Finn Wolfhard, Mckenna Grace, and Paul Rudd, while Bill Murray, Dan Aykroyd, Ernie Hudson, Sigourney Weaver and Annie Potts reprise their roles from the original films. It is the fourth film in the Ghostbusters franchise.

A third Ghostbusters film had been in various stages of development since Ghostbusters II in 1989. After Murray refused to commit to the project, and after the death of cast member Harold Ramis in 2014, Sony instead produced a reboot. After the film underperformed at the box office, Reitman began developing a direct sequel to the original films. The new cast members were announced by July 2019, while the original cast signed on two months later.

After being evicted from their home, two children and their single mother move to a farm in Summerville, Oklahoma, inherited from their late grandfather. When the town experiences a series of unexplained earthquakes, the children discover their family's link to the original Ghostbusters, who have become something of a myth as many have long-since forgotten the events of the "Manhattan Crossrip of 1984", and the secret legacy that their grandfather left behind.

Retrieved from "https://movies.fandom.com/wiki/Ghostbusters:_Afterlife?oldid=302447"
Community content is available under CC-BY-SA unless otherwise noted.