watch 02:52
'Glass' - Official Trailer
Do you like this video?
Glass 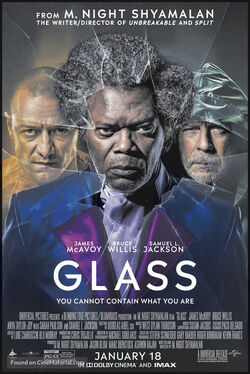 Glass is a 2019 American superhero horror thriller film written, co-produced and directed by M. Night Shyamalan. The film is intended to be the third and final installment in the Unbreakable series, which includes Unbreakable (2000) and Split (2016). Bruce Willis and Samuel L. Jackson will be reprising their Unbreakable roles, while James McAvoy and Anya Taylor-Joy will be returning as their Split characters, along with Sarah Paulson joining the cast.

While there was interest in creating a sequel to Unbreakable, Touchstone Pictures opted not to finance despite the film's solid box office performance. Shyamalan set out on writing Split using a character he had written for Unbreakable but pulled from the script due to balance issues. Shyamalan realized the opportunity he had to create a trilogy of works, and adapted the ending of Split to establish the film as within the Unbreakable narrative. This included securing the rights to use Willis's Unbreakable character from Disney, with the promise of including them within the production and distribution of this third film alongside Universal Pictures should it be made. Split was a financial and critical success, and by April 2017, Shyamalan announced that he had started the production process for Glass.

The film was released on January 18, 2019 by Universal Pictures in North America and by Walt Disney Studios Motion Pictures in international territories.

Three weeks after Kevin Wendell Crumb earns the nickname "The Horde", vigilante David Dunn and his now-grown son Joseph, who have been working together to take down criminals, set out to save four cheerleaders Crumb has abducted. David comes across Kevin, whose alter, "Hedwig," is in control, and discerns the cheerleaders' location using his extrasensory perception. After freeing the cheerleaders, David confronts Kevin's superhuman alter, "the Beast", only for both of them to be arrested when the ensuing fight spills out into the streets.

David and Kevin are sent to a mental institution where Elijah Price, David's sworn enemy, known as "Mr. Glass", is being held. Dr. Ellie Staple, the head doctor of the mental institution, works with patients who claim to have special powers. Staple reveals that she has been given three days to persuade David, Kevin, and Elijah that they are "normal" people who simply believe they have super powers. Staple also knows that David's alleged weakness is water and has a machine that forces the Horde to switch identities, effectively disarming the Beast.

Joseph, Mrs. Price, and Casey Cooke (who survived an attack from the Beast) all visit at separate times to attempt to aid their associates, but fail. As part of her final evaluation, Staple puts the three patients in one room and begins to chip away at David and the Horde's belief in their abilities being supernatural. Though Elijah has been heavily sedated throughout his stay, Staple reveals that his own MRI results show irregularities in the frontal lobe of his brain, which she believes could explain his obsession with proving the existence of super-powered humans.

The evaluation attracts Elijah, who has been surreptitiously swapping out his medication with aspirin and faking his sedated state, to the Beast. That night, Elijah breaks into the Horde's cell to prepare them for the Beast's awakening, but is captured and has laser surgery performed on his brain. However, it's revealed that Elijah had anticipated this and had previously sabotaged the surgical laser, causing it to have no effect on him; he escapes captivity by killing an orderly and sets off to awaken the Beast. Elijah convinces the Beast to battle David during the public unveiling of the city's new highest tower to revive the Horde's faith and reveal the existence of superhumans to the world, before turning his attention to David and forcing him to accept the truth of his superhuman abilities to escape, lest Elijah destroy the tower in place of the showdown. David, Kevin and Elijah are all able to escape from the hospital. David and the Beast face off again outside of the hospital and are evenly matched until Staple intervenes. Staple orders a team of Philadelphia Police Department officers to subdue each of the superhumans, but David and the Beast fend them off.

Elijah tells the Beast that water is David's weakness, but Joseph intervenes and reveals to the Beast that Elijah orchestrated the train crash that killed Kevin's father, the same train crash that Elijah caused to find David. After Kevin's father died, his abusive mother began torturing him, thus leading to the creation of The Beast. The Beast thanks Elijah for creating him, but because his purpose is to protect Kevin, the Beast mortally wounds Elijah and then throws David into a water tank. David survives but is critically weakened by the water. The Beast retreats and promises to finish him off at the tower. However, Casey confronts the Beast before he can escape and summons the real Kevin to take control by speaking his full name. Without the Beast's superhuman strength and durability to protect him, Kevin is fatally shot by another officer working for Staple and dies in Casey's arms.

Staple's men then kill the weakened David by drowning him in a flooded pothole. Staple reveals that she is part of a secret Illuminati-like society that covers up the existence of superhuman beings from the rest of the world. Staple tells him that if she had successfully brainwashed him into thinking he was normal, she would have left him alone, but the Beast ruined that and she will now resort to murder in order to silence him. As Elijah finally dies of his wounds, Staple reveals to him a global conspiracy that has masterminded the suppression, pacification and genocide of superhuman heroes and villains for over 10,000 years in order to protect modern civilization from what they fear would become the tyranny of living "gods" over "men."

With all three superhumans dead, Staple deletes the security footage to report her mission as a success. However, she discovers that the cameras around the mental institution had previously been hacked by Elijah and had been live-streaming to a private network. Shortly thereafter, Mrs. Price, Joseph and Casey all receive a copy of the footage and choose to release it to the public via the Internet, bringing the existence of superhumans to the awareness of the public to avenge the death of the three extraordinary people.

Glass received mixed to negative reviews from critics. On Rotten Tomatoes, The film has a score of 37% based on 372 reviews with an average score of 5.12/10.

After the release of Unbreakable in 2000, rumors of possible sequels began circulating in different interviews and in film fansites. In 2000, Bruce Willis was quoted as hoping for an Unbreakable trilogy. In December 2000, director/writer M. Night Shyamalan denied rumors he wrote Unbreakable as the first installment of a trilogy, saying he was not even thinking about it. In August 2001, Shyamalan stated that, because of successful DVD sales, he had approached Touchstone Pictures about an Unbreakable sequel, an idea Shyamalan said the studio originally turned down because of the film's disappointing box office performance. In a September 2008 article, Shyamalan and Samuel L. Jackson said there was some discussion of a sequel when the film was being made, but that it mostly died with the disappointing box office. Jackson said he was still interested in a sequel but Shyamalan was non-committal. In February 2010, Willis said that Shyamalan was "still thinking about doing the fight movie between me and Sam that we were going to do", and stated that as long as Jackson was able to participate he would be "up for it".

Shyamalan continued to work on other films following Unbreakable, and in 2016 he released Split. The principal antagonist in Split is Kevin Wendell Crumb, played by James McAvoy, a person suffering from dissociative identity disorder which affects his body chemistry, adapting the mannerisms of each of the separate personas. One of these personalities is "The Beast", which causes Crumb's body to transform into a feral superhuman state, with the desire to consume those that have not had a traumatic situation in their lives – those it does not consider "broken". Crumb had been written in the script for Unbreakable, but Shyamalan felt there were balancing issues with his inclusion, and removed him from the story; Split was effectively rewritten from some of the scenes he had planned for Crumb expanded out into a standalone picture.

The final scene for Split includes the appearance of David Dunn, played by Willis. Shyamalan included Dunn here to connect Split to Unbreakable, with Dunn on learning about the escape of "The Beast", realizing that there are other superhumans in the world, as predicted by Mr. Glass (Jackson). By including this scene, he realized there may be a possibility of completing a trilogy of films. Shyamalan stated "I hope [a third Unbreakable film happens]. The answer is yes. I'm just such a wimp sometimes. I don't know what's going to happen when I go off in my room, a week after this film opens, to write the script. But I'm going to start writing. [I have] a really robust outline, which is pretty intricate. But now the standards for my outlines are higher. I need to know I've won already. I'm almost there but I'm not quite there."[15] Unbreakable had been produced under Touchstone Pictures, a subsidiary of Walt Disney Studios, while Split was produced through Universal Pictures. Shyamalan had to get permission from Disney to reuse Dunn. Shyamalan met with Sean Bailey, President of the Walt Disney Studios, about the use of the character; they came to a gentlemen's agreement where Bailey agreed to allow the use of the character in the film without a fee and Shyamalan promised that Disney would be involved in a sequel, if developed.

Split was met with critical and financial success, and in February 2017, Shyamalan affirmed his next film would be the third work in the Eastrail 177 trilogy. Shyamalan finished the script by April 2017, announcing that it would be called Glass and with a target release date of January 18, 2019. Universal will distribute the film in North America and Walt Disney Studios Motion Pictures distributed the film internationally through the Buena Vista International label.

The cast will include returning actors from both films: Bruce Willis, Samuel L. Jackson, Spencer Treat Clark, and Charlayne Woodard from Unbreakable and James McAvoy and Anya Taylor-Joy from Split will all reprise their respective roles in Glass. Sarah Paulson has also joined the cast as a new character. In November 2017, Adam David Thompson joined the cast in an undisclosed role.

Principal photography on the film began on October 2, 2017 in Philadelphia, following a week of rehearsals. Shyamalan planned for a 39-day shoot in this period. On October 31, 2017 it was reported that Shyamalan was filming at the Allentown State Hospital for the film and would be filming there for a few weeks. On December 12, Shyamalan revealed that 4 scenes are being planned to be shot in January 2018, stating he'd have to travel for those. On February 16, 2018, a scene was filmed at Bryn Mawr College in the athletic center. On July 12, 2018, the first official photographs from production were released, including shots of Samuel L. Jackson, Sarah Paulson, and James McAvoy.

Retrieved from "https://movies.fandom.com/wiki/Glass_(2019_film)?oldid=251324"
Community content is available under CC-BY-SA unless otherwise noted.