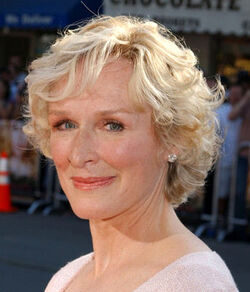 Glenn Close (March 19, 1947) is an American actress and singer from Connecticut, known for compelling live theater performances and roles on the silver screen as the femme fatales or a woman with great power. The latter list includes a scheming Mariquise in Dangerous Liaisons, the Vice President in Air Force One, the First Lady in Mars Attacks!, a stalker in Fatal Attraction and Cruella Devil in 101 Dalmatians and 102 Dalmatians. Her collective work has earned her three Tonys, an Obie, three Emmys, two Golden Globes, and a Screen Actors Guild Award.

Glenn Close has been nominated for 5 Oscars, but has never won.

Retrieved from "https://movies.fandom.com/wiki/Glenn_Close?oldid=106090"
Community content is available under CC-BY-SA unless otherwise noted.