Start a Wiki
God's Not Dead 2 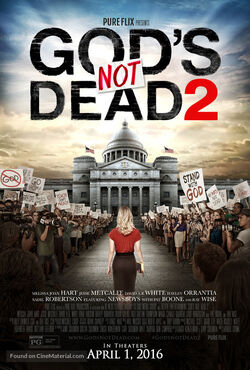 God's Not Dead 2 is a 2016 Christian Persecution film directed by Harold Cronk and stars Melissa Joan Hart, Jesse Metcalfe, David A. R. White, Hayley Orrantia and Sadie Robertson. It is the sequel to the 2014 film God's Not Dead. It was released on April 1, 2016 by Pure Flix Entertainment.

High-school history teacher Grace Wesley (Melissa Joan Hart) comes under fire for answering a student's (Hayley Orrantia) question about Jesus. When Grace refuses to apologize, the school board votes to suspend her and threatens to revoke her teaching certificate. Forced to stand trial to save her career, Grace hires young lawyer Tom Endler (Jesse Metcalfe) to defend her in court. Endler devises a powerful strategy to show the jury the historical significance of Wesley's classroom discussion.

Retrieved from "https://movies.fandom.com/wiki/God%27s_Not_Dead_2?oldid=120686"
Community content is available under CC-BY-SA unless otherwise noted.