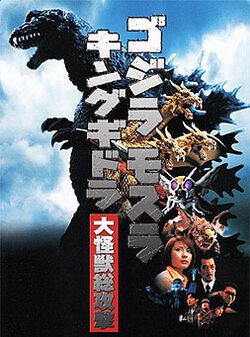 Godzilla, Mothra and King Ghidorah: Giant Monsters All-Out Attack (ゴジラ・モスラ・キングギドラ 大怪獣総攻撃 Gojira, Mosura, Kingu Gidora: Daikaijū Sōkōgeki, also known as GMK) is a 2001 science fiction kaiju film directed by Shūsuke Kaneko, written by Kaneko, Keiichi Hasegawa and Masahiro Yokotani, and starring Chiharu Niiyama, Ryudo Uzaki, Masahiro Kobayashi and Mizuho Yoshida. It is the twenty-fifth installment in the released in the Godzilla film series as a part of the Millennium series. Set nearly 50 years after the events of Godzilla, the film tells the story of a revived Godzilla possessed by the spirits of the Japanese soldiers that died in World War II.

The film was released in the United States on cable television on August 31, 2003 then followed with a DVD release in early 2004.

The film also has the longest name of any Godzilla movie.

Director Shūsuke Kaneko's original script originally had Anguirus, Varan and Baragon defend Japan against Godzilla, but Toho told him to replace the former two with the more popular King Ghidorah and Mothra, as Anguirus and Varan were not considered bankable enough to guarantee a box-office hit. Skeptical at first, he managed to work the two monsters into the film. American fans were upset that Baragon was chosen to remain instead of Anguirus but the reason for this was that Baragon was popular in Japan despite only appearing in two kaiju films also distributed by Toho.

The film is especially notable for the changes made to the monsters. For example, Ghidorah typically played the villain in previous Godzilla films; this film has him as a hero. In fact, Ghidorah is actually portrayed a few meters shorter than Godzilla; previous incarnations of the character were much larger, and towered over Godzilla.

Originally, Godzilla was intended to walk with his back and tail parallel to the ground however, this idea was dropped due to the strain it put on Mizuho Yoshida (the actor playing Godzilla), and Godzilla retains his traditional posture.

Mothra was also revamped. Like Ghidorah, Mothra is portrayed as being far smaller than normal and looking more like a Butterfly than a Moth. Her poison powder and hurricane wind attacks were removed, and were replaced with a burst of stingers fired from her abdomen. In addition, Mothra's fairy servants, the Shobijin, are dropped completely, (though a homage exists in the form of twins from Gamera 3: Awakening of Irys who look up in awe at Mothra as she flies overhead).

Baragon was also altered. His heat ray was removed, his roar was changed and his horn is no longer bioluminescent.

Apparently, the reason behind the changes to Ghidorah, Mothra, and Baragon were made in order to make Godzilla seem stronger. Director Kaneko wanted Godzilla to be the most powerful monster in the film. He originally wanted to use monsters who are notably smaller and less powerful than Godzilla, as his opponents. When advised by Toho to replace them, he compensated by making Ghidorah and Mothra weaker than they normally were. Fuyuki Shinada, who designed the monster suits for the film, was disappointed that Varan (his all-time favorite monster) wasn't going to be in the film, so he compromised by putting Varan's facial features on Ghidorah's three heads.

In addition, the radioactive element has been replaced with a more mystical element. Godzilla has origins rooted in Japan's World War II past. Although Godzilla is still a mutant dinosaur created by the atomic bomb, he is also described as an incarnation of those killed or who were left to die at the hands of the Imperial Japanese Army during the Pacific War. The extent to which his nuclear and spiritual origins balance is never specified. Kaneko, a lifelong pacifist, did this to boost the anti-war angle of the original Godzilla. It was also because he knew that audiences wanted a realistic Godzilla, but there was no realistic way to explain a 60-meter mutant dinosaur, so he thought it worked better with a fantasy element.

Godzilla, Mothra and King Ghidorah: Giant Monsters All-Out Attack holds a 54% rating on Rotten Tomatoes, based on thirteen reviews. Troy Guinn of Eccentric Cinema gave the film a score of 8/10, calling it "one of only three Godzilla films I would recommend to anyone besides giant monster-movie fans or sci-fi buffs, the other two being the original Gojira and Mothra vs. Godzilla." Bryan Byun of DVD Verdict gave it a positive review, calling it "one of the most exciting entries in Godzilla's long cinematic history." Stomp Tokyo gave the film a score of 3/5, calling it "one of the better-looking entries in the series, albeit one of unfulfilled potential." John Wallis of DVD Talk felt that "the story is quite weak and somber" and that "this new take on [Godzilla] doesn't really work," while Gemma Tarlach of the Milwaukee Journal said that "GMK is best when it embraces its unabashed cheesiness. But when it tries to make Statements with Meaning, whether on Japan's past aggressions or ersatz samurai ruminations on the duty of a warrior, the movie flounders like a giant lizard hogtied by power lines." Film critic Leonard Maltin gave it three out of four stars, one of only two Godzilla films to receive more than two and a half stars, with the other being Godzilla 2000.

After the film was completed, Toho had their international versions of the movie dubbed in Hong Kong. This dubbed version significantly changes the meaning of several lines throughout the film.

Sony licensed GMK and Godzilla vs. Megaguirus with the hope of giving both films a theatrical release in the United States. Sony's release of Godzilla 2000 proved that traditional Godzilla films failed to attract huge crowds of moviegoers, so plans to give any newer Godzilla films a wide release were scrapped.

Instead, Sony prepared edited television versions of both films. These premiered in the United States on the Sci-Fi Channel on August 31, 2003, during the channel's Labor Day marathon. In February 2004, the uncut international versions of both films were released on DVD with the addition of the original Japanese soundtracks (a first in the US).

Retrieved from "https://movies.fandom.com/wiki/Godzilla,_Mothra_and_King_Ghidorah:_Giant_Monsters_All-Out_Attack?oldid=81022"
Community content is available under CC-BY-SA unless otherwise noted.