watch 03:27
Wiki Targeted (Entertainment)
Do you like this video?
Play Sound
Godzilla Against Mechagodzilla 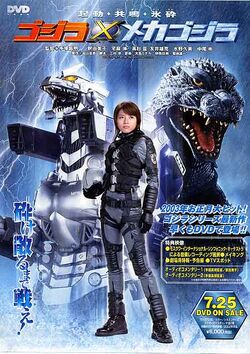 Godzilla Against Mechagodzilla, released in Japan as Godzilla × Mechagodzilla (ゴジラ×メカゴジラ Gojira tai Mekagojira) is a 2002 Japanese science fiction kaiju film directed by Masaaki Tezuka, written by Wataru Mimura, and produced by Toho Co., Ltd. It is the 26th installment in the Godzilla franchise and the fourth film to feature Mechagodzilla. Unlike much of the Millennium Series, the film takes place in continuity with other Toho films, notably Godzilla, Mothra, War of the Gargantuas, Space Amoeba and its successor, Godzilla: Tokyo S.O.S.

After the appearance of a new Godzilla, the Japanese government builds a robotic Godzilla from the bones of the original monster that attacked Tokyo in 1954 to stop the beast.

Reviews of Godzilla Against Mechagodzilla have been positive. Mike Pinsky of DVD Talk gave the film three stars out of five, saying: "While I did have some minor complaints, [this is] a fine entry in the series." Pinsky said "the plot is more interesting than most giant monster movies," and "the battle scenes, which are the main reason anyone watches these films to begin with, were great." Giving the film a "B+" score, Mark Zimmer of Digitally Obsessed said that it's "a good deal of fun and one of the better entries in the series." Digital Monster Island gave the film a "B" score, calling it "a fun and exciting film that should please most kaiju fans."

Rated PG for sci-fi action and some language

Retrieved from "https://movies.fandom.com/wiki/Godzilla_Against_Mechagodzilla?oldid=81020"
Community content is available under CC-BY-SA unless otherwise noted.