watch 02:03
Wiki Targeted (Entertainment)
Do you like this video?
Play Sound
Godzilla vs. Megaguirus 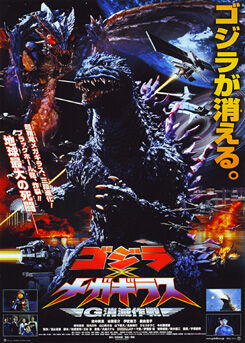 Godzilla vs. Megaguirus, released in Japan as Godzilla x Megaguirus: The G Elimination Project War (ゴジラ×メガギラス G消滅作戦 Gojira tai Megagirasu Jī Shōmetsu Sakusen) is a 2000 science fiction kaiju film directed by Masaaki Tezuka and written by Hiroshi Kashiwabara and Wataru Mimura. It was the twenty-fourth film released in the Godzilla franchise, and the second film in terms of the franchise's Millenium series. It premiered at the Tokyo International Film Festival on November 3, 2000. The film shares the suit used in Godzilla 2000.

Godzilla returns to terrorize Japan! This time, however, Japan has two new weapons to defend themselves. The Gryphon, a high-tech ship, and the Dimension Tide, a device that creates artificial black holes! During a test of the Dimension Tide, eggs appear in the city of Shibuya and hatch into terrifying Meganulons! These creatures need water to grow and flood the city of Shibuya by breaking underground water veins. As they multiply and grow, they start to feed on the energy of humans. After gathering enough energy, they transform in to giant dragonfly monsters called Meganulas! And now they target Godzilla for energy to feed to the larva of their queen, which eventually hatches into the terrifying 60-meter Megaguirus who also begins to attack Godzilla for his energy. Now a 3-way battle between Godzilla, the Megaguirus, and humans begins! Will Godzilla win? Will humanity survive?

The budget of Godzilla vs. Megaguirus is estimated at $8,300,000. It opened in Japan on December 16, 2000, and during its box office run, it grossed approximately $10,000,000, making it the least popular entry in the Millennium Godzilla series in terms of revenue. Total admissions in Japan were approximately 1,350,000. Special effects director Kenji Suzuki reportedly took the blame for the film's weak box office performances.

After the film was completed, Toho had their international versions of the movie dubbed in Hong Kong.

Originally Sony had licensed Godzilla vs. Megaguirus and Godzilla, Mothra and King Ghidorah: Giant Monsters All-Out Attack with the hope of giving both films a theatrical release in the United States. Sony's release of Godzilla 2000 proved that traditional Godzilla films failed to attract huge crowds of moviegoers, so plans to give any newer Godzilla films a wide release were scrapped.

Instead, Sony prepared edited television versions of both films. These premiered in the United States on the Sci-Fi Channel on August 31, 2003, during the channel's Labor Day marathon. In February 2004, the uncut international versions of both films were released on DVD with the addition of the original Japanese soundtracks (a first in the US).

Godzilla vs. Megaguirus was released on December 16, 2000 to mixed reactions. Ed Godziszewski of Monster Zero said, "While not the best example of filmmaking, Godzilla vs. Megaguirus nonetheless succeeds as an entertaining film." Miles Imhoff of Toho Kingdom said, "Run-of-the-mill, mediocre, and sterile are the three words that best describe Godzilla vs. Megaguirus. It is a movie that attempts to be creative and edgy, but somehow fails, leaving one wanting with futility to really try to enjoy the film."

Stomp Tokyo said "the music is pretty good" but "this movie isn't a step forward in the ways that it really should be." Mike Bogue of American Kaiju said, "Though not the best of the post-Showa Godzilla movies, Godzilla vs. Megaguirus is one of the most entertaining." Ian Jane of DVD Talk said, "While not the best entry in the Godzilla series, Godzilla vs. Megaguirus ... [is] still a really solid entry with some great special effects and a very memorable monster mash finale."

Matt Paprocki of Blog Critics called the film "a true classic in the series," adding: "It's impossible not to be entertained somewhat, whether you're looking for camp value or serious giant monster action. This one has everything that is required of the [kaiju] genre." Andrew Pragasam of The Spinning Image called the film a "flawed, but entertaining comic book extravaganza" that "only partially delivers as a slam-bang monster epic" and suffers from "a lack of likeable characters."

Retrieved from "https://movies.fandom.com/wiki/Godzilla_vs._Megaguirus?oldid=81021"
Community content is available under CC-BY-SA unless otherwise noted.