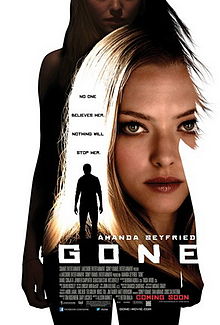 Gone is a 2012 American mystery thriller film written by Allison Burnett, directed by Heitor Dhalia, and starring Amanda Seyfried. This is the last film theatrically released by Summit Entertainment before Lionsgate took over distribution. The film earned negative reviews from critics and was a box office disappointment.

Jillian "Jill" Conway (Amanda Seyfried) lives in Portland, Oregon with her sister Molly (Emily Wickersham), a college student. Much earlier, Jill was kidnapped by a brutal serial killer who put her in a deep vertical hole somewhere in Portland's 5,100-acre Forest Park. Jill found human remains, used one of the bones to stab her abductor, and escaped from the hole, using his rope ladder. When the Portland police are unable to find the hole, and discover that Jill had been committed to a psychiatric institution after her parents' death, they believe the abduction only happened in Jill's head, and sent Jill back to a psychiatric facility.

A year later, Jill now works as a waitress in a local diner on the graveyard shift. She and her friend Sharon Ames (Jennifer Carpenter) are generously tipped by a regular customer. Returning home from the shift, Jill is shocked to discover Molly is missing, as she was to take an exam the next day and wanted Jill to wake her early. Molly's boyfriend, Billy (Sebastian Stan), tells her that he hasn't heard from Molly, and later that she didn't show up for the exam. Jill is then convinced the serial killer who took her has now taken Molly.

Police Lt. Ray Bozeman (Michael Paré), Sergeant Powers (Daniel Sunjata), and Detective Erica Lonsdale (Katherine Moennig) dismiss her claims, trying to look for any other reason for Molly to be missing, believing that it's all in Jill's head. The department's newest homicide detective, Peter Hood (Wes Bentley), tells her that he believes her, giving Jill his card in case she needs any help about the case.

Jill interrogates her neighbors and learns that a van with a locksmith company's name on it parked in front of her house in the middle of the night. Jill finds the company it belongs to and talks to owner Henry Massey (Ted Rooney) and the van's driver, Massey's son Nick (Joel David Moore). When Nick denies any knowledge, Jill breaks into the van, where she finds a receipt from a hardware store for things that the killer would use. Jill holds Nick at gunpoint and forces him to reveal that he allowed a stranger named "Digger" to rent the van during the night.

Nick reports Jill's gun-waving behavior to the police, who then want to arrest Jill, as her time in the psychiatric facility means she can not legally possess a weapon. Jill goes to the hardware store, and learns that Digger's real name is Jim LaPointe (Socratis Otto) and that he's staying at a rundown hotel. After narrowly eluding the police, Jill heads to the hotel, and breaks into LaPointe's room, where she finds duct tape, pet food like that which she was given by her kidnapper, and matches from the diner where she works.

Jill visits Sharon, and learns that LaPointe is the generous tipper from the diner. Sharon gives her LaPointe's phone number and against Sharon's judgment, Jill leaves with the phone number. Jill is spotted by the police who pursue her through Portland, but she escapes back to Sharon's house. Jill borrows Sharon's car to avoid the police and save Molly. Jill then calls LaPointe, who gives her directions to a location in Forest Park. Jill locates a small campsite and finds pictures of LaPointe's prior victims, and at the same time, Molly breaks the duct tape off of her hands, and escapes, only to discover she has been concealed under her house all along. Powers and Lonsdale are shocked when they hear Molly's story, finally believing what they have heard from Jill. They also learn Jill is to meet the kidnapper, but they don't know where that is to happen.

Jill finds the hole where LaPointe held her captive. LaPointe emerges from an alcove from within the hole and grabs Jill, pulling her into the hole. He intends to kill her with the same piece of bone that Jill stabbed him with in her initial escape. Jill kicks LaPointe to keep him away, then grabs her revolver and shoots him. She starts climbing up the rope ladder to get away, but LaPointe grabs her foot and attempts to pull her back down. Desperate, Jill kicks LaPointe to break his hold and shoots him again. She then manages to climb away and extracts the rope ladder, trapping LaPointe in the hole. After shooting LaPointe a third time in the leg so that he cannot stand, Jill demands he tell her where Molly is, on a promise of not shooting him again. LaPointe admits that Molly has been bound and gagged under their house the whole time, and he only used Molly to lure Jill into the trap. Jill pours a can of kerosene into the hole. As LaPointe begs for his life, saying "You said you wouldn't kill me," she says "I lied," and drops in a lantern, burning LaPointe to cremate.

Jill disposes of the revolver and returns home, finding Molly okay, along with Powers, Lonsdale, and Hood. As Molly is terrified at the ordeal, Jill whispers to her that LaPointe is dead. When Powers asks about the man she was to meet, Jill (with deadpan sarcasm) tells the police, "It was all in my head." Then she and Molly go into the house and close the door, leaving the police and Billy frustrated.

Some time later, Bozeman, in his office, receives an anonymous package. Inside are the pictures LaPointe had taken of each of his victims, bound and gagged, including Jill herself. An included map indicates the spot in Forest Park where the police can find the hole. Realizing how wrong he was about Jill, Bozeman calls Powers into his office to investigate the new leads.

The rated PG-13 film was not screened for critics and was panned. Gone currently holds an 11% rating on Rotten Tomatoes based on 62 reviews from critics; the consensus states "a slow, traditional thriller that is neutered by its script and its rating." On Metacritic, which uses an average of critics' reviews, Gone has a 36/100 rating, indicating "generally unfavorable" reviews.

Retrieved from "https://movies.fandom.com/wiki/Gone?oldid=136542"
Community content is available under CC-BY-SA unless otherwise noted.