watch 01:45
The Loop (Movies)
Do you like this video?
Play Sound
Good Boys 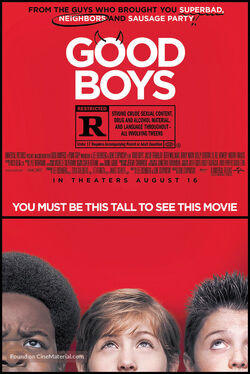 The film premiered at the South by Southwest Film Festival on March 11, 2019. It was released in the United States on August 16, 2019, by Universal Pictures.

Friends Max, Lucas, and Thor enter sixth grade facing their own personal dilemmas: Max has a crush on classmate Brixlee, Lucas learns his parents are getting divorced, and teasing from his peers discourages Thor from pursuing his love of singing. When presented with the opportunity to kiss Brixlee at a party hosted by popular student Soren, Max and his friends use his father's valued drone to spy on his teenage neighbor Hannah in an attempt to learn proper kissing. The plan goes awry and results in the drone being destroyed and Max, Lucas, and Thor in possession of Hannah's ecstasy. To avoid getting grounded, the three boys skip school to buy a new drone at the local mall, with Hannah and her friend Lily in pursuit.

Amid a series of escapades, Max, Lucas, and Thor reach the mall, but learn that Hannah and Lily bought the drone and will only give it to the boys in exchange for their ecstasy. Having surrendered the drugs to a police officer, the boys manage to obtain new ecstasy from Hannah's ex-boyfriend, Benji, and trade it for the drone. Nevertheless, Max is unable to prevent his father from finding out that he used the drone and is grounded. An argument ensues between the friends and the three go their separate ways, although Max takes the blame for what transpired to prevent Lucas and Thor from getting in trouble. When Lucas speaks to his parents about the potential end of his friendships, they advise him that he, Max, and Thor are growing apart.

That night, Lucas convinces Max to sneak out to attend the party, tricking Max and Thor into meeting up again in the process. Max successfully kisses Brixlee while Lucas and Thor re-encounter Hannah and Lily, the latter revealed as Soren's sister, who encourage Thor to continue his passion for singing. In the ensuing weeks, Thor lands the role of Stacee Jaxx in the school's amateur production of Rock of Ages, Lucas joins the anti-bullying group at the school, and after his relationships with Brixlee and then her friend Taylor end in heartbreak, Max begins dating his classmate Scout. Following a performance of the school musical, Max, Lucas, and Thor reconcile and promise to remain in each other's lives.

Retrieved from "https://movies.fandom.com/wiki/Good_Boys?oldid=195364"
Community content is available under CC-BY-SA unless otherwise noted.