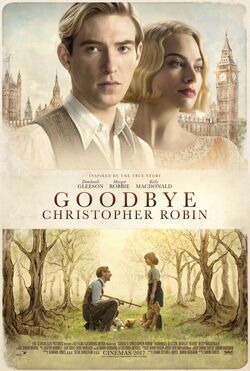 Goodbye Christopher Robin is a 2017 British biographical drama film about the lives of Winnie-the-Pooh creator A. A. Milne and his family, especially his son Christopher Robin. It was directed by Simon Curtis and written by Frank Cottrell-Boyce and Simon Vaughan, and stars Domhnall Gleeson, Margot Robbie, and Kelly Macdonald. The film premiered in the United Kingdom on 29 September 2017. It received mixed reviews from critics and grossed $7.2 million at the box office.

In 1916 during WWI, veteran A. A. Milne – nicknamed "Blue" is fighting in the Battle of the Somme. He and his wife Daphne resume life in England being a playwright. The Great War has inflicted so much sorrow that people are finding it hard to readjust to happiness. Blue is currently suffering shell shock of occasional flashbacks to his battle experiences, and having a child with Daphne. She was hoping for a girl christened Rosemary and is disappointed to instead have a son, whom they name Christopher Robin Milne but generally call 'Billy Moon.' At his first birthday, Billy received an Alpha Farnell teddy bear, which he originally named Edward. They hire a nanny, Olive Brockwell, whom Billy calls her Nou, is given primary responsibility for raising the child.

In 1925, Blue is having difficulty resuming his writing – he wants to draft a compelling treatise against war – and relocates the family to a cottage with wooded acreage near Ashdown Forest in Hartfield. Daphne resents the move and returns to London for an extended period. During that time, Olive goes to care for her dying mother and the cook takes some time off, leaving Blue and Billy to fend for themselves. Reluctantly at first, Blue takes Billy along on walks in the woods and begins making up stories about the boy's adventures with the plush toy animals, Piglet, Eeyore, Kanga, Roo and Tigger, the parents have bought for him. The boy and father play a simple game of Poohsticks at a bridge over running water; each drop a stick on the upstream side of the bridge and the one whose stick first appears on the downstream side is the winner. Billy changed the name of his teddy bear to "Pooh" after a swan and a Canadian bear named Winnipeg he saw while visiting the London Zoo with Blue. The father is enchanted by his son's imagination aspires to in script a children's storybook.

Blue invites his illustrator friend Ernest to join them at the house, and together they begin to develop the Winnie-the-Pooh books. Billy together with Pooh will depict as the basis characters in the books. Daphne returns to the house after Blue sends her a poem, "Vespers," that she has published in Vanity Fair. Olive returns following her mother's death. After the Winnie-the-Pooh books become a success, Daphne manages their newfound celebrity. However, Billy assumed that his father was writing a book just for him. As Christopher Robin, Billy is confused and uncomfortable for frequently being "public's eye." When Billy learns that Olive has a beau, Alfred, he tells his parents, after which Daphne feels betrayed and confronts Olive. She becomes livid with Blue and Daphne, resigns, and admonishes them for what they have been putting Billy through. Blue ends Billy's publicity activities. He takes him to another visit at the zoo for some reassuring, though fans' regular attention makes it to no avail. Billy understood that his namesake has left him an "empty fame."

Blue resolves to stop writing about the boy and his imaginary friends and enrolls him at a boarding school. But "Christopher Robin" is bullied at the school and emerges bitter toward his father. In 1941 when WWII broke out, Billy aims to be a private sapper so that people would stop recalling him as Christopher Robin. Billy is initially declared unfit for the draft having failed medical examination, but he demands that his well-connected father – despite being horrified by war and the prospect of his son experiencing what he did – convince the army to accept him regardless. Billy leaves for service, turning his back on his father and disowning the books (including Pooh) and the money from them. Blue sadly walks into his son's old bedroom recounts young Billy.

Blue and Daphne receive a distress telegram at their home, this time explaining that Billy has been reported missing and is presumed dead – news his parents pass along to Olive. However, Billy has survived and arrives at the country house without warning, leading to awkward but tearful reunions with his parents and Olive. Blue and Billy reconcile and, they walk together through the woods. Billy mentions that while on the battlefield men were humming the Winnie-the-Pooh song, realizing that his father truly was trying to remind the world what happiness is, even though he didn't mean to stain his childhood. The story ends with Blue walking Billy as a young child holding the teddy bear.

Winnie-the-Pooh's fame continued to grow. Christopher never touched any of the money generated from the books. He married happily and opened a bookshop in Devon but concentrate on his own interest. Pooh and the original stuffed animals were donated to the New York Public Library. Winnie-the-Pooh is voted the best loved children's book of all time.

Development on the project first began in 2010, with Steve Christian and Nuala Quinn-Barton, and subsequently Damian Jones, as producers. Simon Vaughan wrote the screenplay.

In April 2016, Domhnall Gleeson entered discussions to star as A. A. Milne. He and Margot Robbie were confirmed to star in June 2016, with her as Milne's wife Daphne. Kelly Macdonald joined the film as Olive, Christopher Robin's nanny, later in the month.

On review aggregator Rotten Tomatoes, the film has an approval rating of 63% based on 163 reviews, with an average rating of 6.3/10. The site's critical consensus reads, "Goodbye Christopher Robin struggles to balance wartime tension and childlike wonder, but offers valuable insight into the darkness shadowing the creation of a classic children's tale." On Metacritic, the film has a weighted average score of 54 out of 100, based on 28 critics, indicating "mixed or average reviews".

The Economist gave the film a mixed review, writing that "As in so many middlebrow period dramas, the vintage cars are too shiny, the clothes too smart, the upper-class accents too strained and the dialogue too contrived. However dark the plot becomes, the sun keeps shining brightly through the trees. You are never allowed to forget that you are watching a traditional piece of tourist-friendly British heritage cinema." The review praised it, however, stating that, "There aren’t many films that demonstrate how a phenomenal professional success can also be the most catastrophic personal failure; there certainly aren’t many that revolve around a collection of cuddly toys."