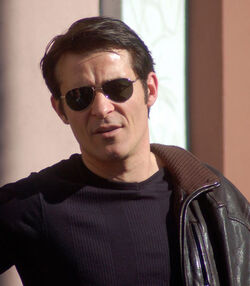 Goran Višnjić is a Croatian American actor who has appeared in many American and British films and TV series from various productions.

Born on September 9, 1972 in Croatia, Goran Visnjic turned out to be one of Hollywood’s finest actors, best known for his role as Dr. Luka Kovac in the TV Series ER. This talented actor started his acting career quite early, appearing in various stage performances. Upon finishing high school he was recruited in the Croatian Army, and later on he joined the army voluntarily in order to defend his country.

He was raised in a modest family in a small town on the Adriatic coast. His mother worked in a local grocery shop, while his father was a bus driver. His passion for art and acting brought him to Zagreb, the country’s capital, where he enrolled at the Academy of Dramatic Arts. In his second year of studying, Goran Visnjic was chosen to play the role of Hamlet, and became the youngest Croatian actor to ever play that role, for which he was honored with the prestigious "Orlando" award.

From there on, thing took a natural course, and in 1988 Goran Visnjic had his debut on screen appearance in a Serbian movie. His acting skills and sincerity of feeling led his to his first international role as he was casted in Michael Winterbottom’s film "Welcome to Sarajevo". This was a big turning point in his career, because it was exactly this performance that caught the eye of a famous American producer. Captivated by his brilliant acting skills and natural charisma, the producer called Goran Visnjic and invited him to come to the U.S. and audition for some projects. Soon after arriving he appeared in a video for one Madonna’s songs, and eventually got the role of his life when he was chosen to star in the hit TV series "ER". Since then, Goran Visnjic has had an array of successful roles, appearing in movies like "The Peacemaker", "Rounders", "Practical Magic", and starring in a few TV Series like "Timeless", "Crossing Lines" and "Extant".

Retrieved from "https://movies.fandom.com/wiki/Goran_Visnjic?oldid=105186"
Community content is available under CC-BY-SA unless otherwise noted.