Grave of the Fireflies

View src
watch 01:33
Wiki Targeted (Entertainment)
Do you like this video?
Play Sound
Grave of the Fireflies
火垂るの墓 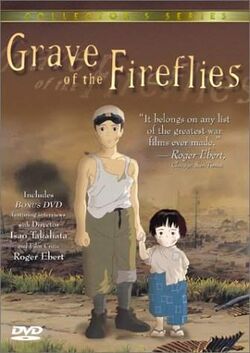 Grave of the Fireflies (火垂るの墓, Hotaru no Haka?) is a 1988 animé (animated) film written and directed by Isao Takahata for Studio Ghibli. It is an adaptation of the semi-autobiographical novel of the same name by Akiyuki Nosaka, intended as a personal apology to the author's own sister. Some critics (most notably Roger Ebert) consider it to be one of the most powerful anti-war movies ever made. Animation historian Ernest Rister compares the film to Steven Spielberg's Schindler's List and says, "it is the most profoundly human animated film I've ever seen."

Taking place toward the end of World War II in Japan, Grave of the Fireflies is the poignant tale of the relationship between two orphaned children, Seita (清太) and his younger sister Setsuko (節子). The children lose their mother in the firebombing of Kobe, and their father in service to the Imperial Japanese Navy, and as a result they are forced to try to survive amidst widespread famine and the callous indifference of their countrymen (some of whom are their own extended family members). Ultimately both children die of starvation, and the graphic nature of their suffering and death is uniquely harrowing in the annals of anime.

In common with other Studio Ghibli productions, the film is noteworthy for the high quality of its design and artwork.

Its initial theatrical release was accompanied by Hayao Miyazaki's much more lighthearted My Neighbor Totoro as a double feature.

The story is based on the semi-autobiographic novel by the same name, whose author, Nosaka, lost his sister due to malnutrition in 1945 wartime Japan. He blamed himself for her death and wrote the story so as to make amends to her and help him accept the tragedy.

Due to the graphic and truly emotional depiction of the negative consequences of war on society and the individuals therein, some critics have viewed Grave of the Fireflies as an anti-war film, especially as no positive consequences of war are shown in the story. The film does provide an insight into Japanese culture by focusing its attention almost entirely on the personal tragedies that wars give rise to, rather than seeking to glamorize it as a heroic struggle between competing ideologies. Conversely, some critics have cited the film's narrow focus on suffering by solely Japanese characters as a classic example of Japanese myopia towards the root causes of WWII and the failure of Japan to address its own grave responsibilities for aggressive acts of war and war crimes dating to the 1930s.

An alternative interpretation is that Grave of the Fireflies illustrates the danger of pride over reason. This view holds that Nosaka's alter ego, Seita, must face a crucial decision (on two occasions - when he leaves the aunt's house and when the man in the field rejects him), either stay with the wicked aunt, work, earn money and face reality, or run away. Ultimately, Seita choses pride over reason, and his fate and that of Setsuko is the result of his own decision to leave the aunt's house - had they stayed, they would have most likely survived. Moreover, some have argued that if the film is in fact true to the book (which is a personal apology to the author's own sister), such a premise in and of itself hardly demonstrates an intent to make the film a strident anti-war treatise.

Japanese nouns do not change to form plurals, so hotaru can refer to one firefly or many. It may be that Setsuko is the "firefly" of the title. If so, the title can be interpreted as A Grave for a Firefly. Or to maintain the lack of distinction over plurals, The Firefly Grave could also be used. Mature fireflies which emit light have extremely short life spans of two to three weeks and are traditionally regarded as a symbol of impermanence, which resonates with much of classical Japanese tradition. Fireflies are also symbolic of the human soul ("Hitodama"), which is depicted as a floating, flickering fireball. ("Heike Hotaru", a species of firefly that exist in the Western region of Japan, is so-called because people considered their lights, hovering near rivers and lakes, to be the souls of the Heike family, all of whose members perished in a famous historic naval engagement - the Battle of Dan-no-ura.)

In the Japanese title of the movie the word hotaru (firefly) is written not with its usual kanji 蛍 but with the two kanji 火 (hi, fire) and 垂 (tareru, to dangle down, as a droplet of water about to fall from a leaf). This is intended to evoke images of fireflies as droplets of fire. Some consider that this evokes senkō hanabi {fire droplet firework, a sparkler firework which is held upside down}. Fireworks, in general, are considered to be another symbol of the ephemerality of life. Senkō hanabi is particularly poignant in this respect because it must be held very still or the fire will drop and die, which represents the fragility of life. Senkō hanabi also evoke images of family, because it is a summer tradition in Japan for families to enjoy fireworks together. Watching fireflies is another summer family tradition. Together, the references evoke the bond between Seita and Setsuko, but at the same time emphasize their isolation due to the absence of their parents.

Alternatively, pairing the two kanji for "fire" and "dangle down" may also be a metaphor for the experience of aerial bombing using Incendiary device weapons. Anecdotal evidence suggests that the Japanese during the war sometimes referred to falling and exploding incendiary bomblets as "fireflies."

Unlike the rest of Studio Ghibli's films, which were released by The Walt Disney Company, Grave of the Fireflies was released in the U.S. by Central Park Media in a two-disc set. The first disc contains the film uncut in both an English dub and a Japanese dub with English subtitles as well as the film's storyboards. The second disc contains several extras, including a retrospective on the author of the original book, an interview with Director Isao Takahata, and an interview of well-known critic Roger Ebert, who has expressed his admiration for the film on several occasions.

NTV in Japan produced a live-action version of Grave of the Fireflies, in celebration of the 60th anniversary of the end of the WWII. The movie began airing on November 1, 2005 at 21:00 Japanese time. Like the animé, the live-action version of Grave of the Fireflies focuses on two siblings struggling to survive the final days of World War II in Kobe, Japan. However, unlike the animated version, it tells the story from the point of view of their Aunt, and deals with the issue of how the war-time environment could change a kind lady to a cold-blooded demon, and stars famous Japanese celebrity and actress Nanako Matsushima as the aunt. The movie is approximately 2 hours and 28 minutes long.