watch 00:59
The Loop (Movies)
Do you like this video?
Gravity 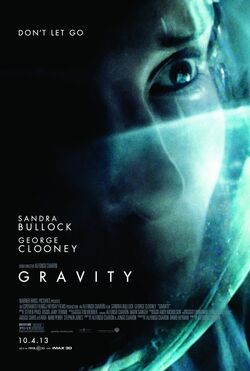 Biomedical engineer Dr. Ryan Stone is on her first space shuttle mission, accompanied by veteran astronaut Matt Kowalski, who is commanding his final expedition. During a spacewalk, debris from a satellite crashes into the space shuttle Explorer, destroying most of it and leaving them stranded in space with limited air. The debris continues to hit other satellites, causing a chain reaction of destruction until the satellites necessary for the two astronauts to communicate with Mission Control in Houston are also destroyed. Even though they do not receive messages from Mission Control, both Kowalski and Stone continue to transmit "in the blind" to Mission Control, in the hopes that Mission Control can hear them.

Stone tumbles out of control after separating from the shuttle's cargo bay arm. Kowalski, who is wearing a thruster pack as part of his spacesuit navigates to Stone and retrieves her. The two tether together, and make their way back to Explorer, where they discover the shuttle has been damaged beyond repair, and the rest of their crew are dead. They then decide to use the thruster pack to make their way to the ISS, which is nearby in orbit. Kowalski sets the timer on his suit for 90 minutes, estimating the debris that destroyed Explorer will orbit the Earth and come back around in that amount of time.

Kowalski is ever calm and efficient in the crisis, continuing to reassure Stone that they will both make it back to Earth safely. En route to the ISS, the two discuss Stone's life back home and the death of her young daughter in a schoolyard accident. As they approach the ISS, it is clear that the ISS crew has evacuated due to the debris field causing damage. One Soyuz module for delivering ISS crew and returning them to Earth is missing, used by the ISS crew to evacuate the station. The other Soyuz module has been damaged, and its landing parachute has been deployed as a result. It becomes clear that the remaining Soyuz module cannot return them to Earth safely.

As they approach the ISS they realize they have almost no air left and only one thruster burst remaining in Kowalski's pack. They bounce off the many parts of the ISS as they attempt to grab on at their accelerated speed relative to the station. Stone is able to grab onto the ISS for a moment, however, Kowalski's momentum yanks Stone away from the ISS. As they both bounce off the ISS further, a solar wing they pass severs the the tether holding the two together. At the last moment, Stone becomes entangled in parachute cords connected to the ISS and is able to grab hold of the tether connected to Kowalski. His additional mass stretches the parachute cords causing the two of them to nearly break free. He sacrifices himself for her survival and unclips his strap, floating away. She indeed floats easily back to the ISS now. Kowalski is still in radio contact with her, asking Stone about her minimal piloting training and instructs Stone to use the Soyuz capsule to travel to a nearby Chinese space station Tiangong. Kowalski says that even if the Chinese have evacuated, she can use a return module that is based on the design of the Soyuz, and Stone's limited training will get her home safely.

Stone boards the ISS, which has been damaged but still has breathable air. Stone makes her way to the Soyuz module, but a fire starts from sparking wires aboard the ISS. She tries vainly to put out the fire, and finally gets aboard the Soyuz. Once aboard, Stone undocks the module and proceeds to fire the thruster, but the parachute cables are tangled, keeping the Soyuz from getting free. Stone puts on one of the Soyuz spacesuits and spacewalks outside to release the parachute cables from the capsule. 90 minutes have passed and during the spacewalk, the satellite debris approaches again, impacting with the ISS and the Soyuz. Stone barely makes it inside the Soyuz in time, just as the debris field impacts and destroys the ISS.

Stone goes over the emergency manual, and uses the thrusters to line the Soyuz up with Tiangong. She attempts to fire the main Soyuz rocket to navigate to Tiangong; however, the fuel tanks are empty. Stone tries to use the Soyuz radio to contact Earth, but she is only able to reach a farmer who does not speak English on a short wave frequency. Stone resigns herself to her fate of dying, and turns off the oxygen flow in the cabin to hasten her eventual suffocation. She begins to fall asleep, running out of oxygen, when she sees a vision of Kowalski outside the capsule. Kowalski enters the capsule, to Stone's amazement. Stone tells him that there is no fuel left for the main rocket, but Kowalski, ever the optimist, tells Stone that the capsule still has re-entry rockets for a touchdown procedure. These will be just as useful for navigating to Tiangong.

Kowalski is suddenly gone and Stone realizes she hallucinated him in her oxygen-deprived state. She turns the oxygen flow back on in the Soyuz and implements the information about the landing thrusters she remembered from her hallucination, firing the thrusters, making her way to Tiangong. Realizing she is going to miss the station by several dozen meters, Stone picks up a fire extinguisher and opens the Soyuz hatch while the capsule is still pressurized, blowing her across the distance. She navigates to Tiangong using the fire extinguisher as a makeshift thruster. Stone boards Tiangong just as the entire station, having been pushed out of its stable orbit by the satellite debris, starts to burn up on the upper edge of the atmosphere. Stone successfully enters the re-entry commands in the Chinese capsule Shenzhou's computer, and Shenzhou begins its descent towards Earth. On the way down, Stone hears Mission Control over the radio tracking the capsule while rescue teams are being dispatched.

Shenzhou splashes down in a lake in an uninhabited part of the Earth. Stone opens the capsule hatch, but the water rushing in nearly drowns her, pinning her against the back wall. Once the water pressure equalizes, she swims out, but sinks with the weight of her spacesuit. She successfully slips out of her spacesuit and swims to the surface with the last of her breath. She swims to shore watching the remains of Tiangong and other satellite debris as they burn up high in the sky overhead. Stone pulls herself ashore with difficulty and takes her first shaky steps on dry land, gradually adjusting to the Earth's gravity.

Retrieved from "https://movies.fandom.com/wiki/Gravity_(2013)?oldid=189421"
Community content is available under CC-BY-SA unless otherwise noted.