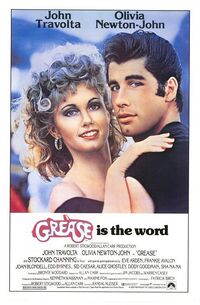 The movie was successful both critically and at the box office and the soundtrack album ended the year 1978 as the second-best selling album of the year in the United States, behind the soundtrack of Saturday Night Fever.

Set in the summer of 1958, local boy Danny Zuko (John Travolta) and vacationing Sandy Olsson (Olivia Newton-John) meet at the beach and fall in love. When the summer ends, Sand (who is going back to Australia) worries that they'll never meet again, but Danny tells her that their love is "only the beginning".

The movie moves to the start of the seniors' term at Rydell High School.

Danny (who is a greaser) is a member of the T-Birds which consists of his best friend Kenickie (Jeff Conaway), Doody (Barry Pearl), Sonny (Michael Tucci) & Putzie (Kelly Ward).

Another clique, the Pink Ladies which consists of popular girls also arrive to school consists of of Rizzo (Stockard Channing), Frenchy (Didi Conn), Marty (Dinah Manoff) & Jan (Jamie Donnelly). After Sandy's parents decide not to return to Australia, Sandy enrolls at Rydell and is befriended by Frenchy, who considers dropping out of school to become a beautician.

Unaware of each other's presence at Rydell, Danny and Sandy tell their respective groups the accounts of events during the pair's brief romance without initially mentioning the other's name. Sandy's version emphasizes the romance of the affair while Danny's version is more sexual (and therefore presumably less honest).

When Sandy finally says Danny's name, Rizzo arranges a surprise reunion for the two, but Danny is forced to maintain his bad-boy attitude in front of his pals, upsetting Sandy, who storms off. Frenchy invites the girls to a pajama party, but Sandy becomes sick from trying a cigarette, drinking and getting her ears pierced by Frenchy.

The T-Birds almost crash the party in Kenickie's Greased Lightning car, but a guilty Danny leaves, followed by Rizzo, who leaves to make out with Kenickie, who later becomes her boyfriend.

The two are disturbed by Leo (Dennis C. Stewart), leader of the T-Birds' rival gang, the Scorpions, and his girlfriend Cha-Cha (Annette Charles), leading to a planned car race between Leo and Kenickie. In an attempt to impress Sandy, Danny turns to Coach Calhoun (Sid Caesar) to get into sports, eventually becoming a runner. He reunites with Sandy and they attempt to go on a date, but their friends crash it, resulting in Kenickie and Rizzo arguing and parting. Left alone, Frenchy is visited by a guardian angel (Frankie Avalon) who advises her to return to school after a mishap in beauty class leaves her with candy-pink hair.

The school dance arrives, broadcast live on television and hosted by DJ Vince Fontaine, (Edd Byrnes) who flirts with Marty. Rizzo and Kenickie attempt to spite one another by bringing Leo and Cha-Cha as their dates while Danny and Sandy arrive together. They dance well and are expected to win, but just before the winners are announced they are separated by Sonny, Danny and Cha-Cha (who used to be boyfriend and girlfriend) end up performing together and winning.

Danny tries to make it up to Sandy by taking her to a drive-in theater, but he makes a clumsy pass at her which causes Sandy to leave. Meanwhile, Rizzo worries that she might be pregnant after she missing her period and confides in Marty, but Marty tells Sonny and he inadvertently spreads the rumor to Kenickie (the apparent father) even though Rizzo denies this to him.

The race arrives, but Kenickie is knocked out by his own car door thanks to Putzie's careless behavior, so Danny takes his place. He & Leo race until Leo crashes and leaves humiliated with Danny as the winner. Sandy watches from afar, concluding that she still loves Danny & she decides to change her attitude and her look to impress him, asking asks Frenchy to help her.

On the last day of school while Principal McGee (Eve Arden) and her assistant Blanche (Dody Goodman) are sobbing about the departing class, the class celebrates their graduation at the fair on the school grounds.

Rizzo discovers that she's not pregnant after all and reunites with Kenickie. Danny becomes a jock, but he is shocked when Sandy arrives with a new hairstyle, dressed in black leather and is seen smoking (although she still looks over at Frenchy to check what to do when Danny notices her).

In song, Sandy & Danny admit they love each other and reunite. The two of them leave in the Greased Lightning car together, which takes flight & they wave goodbye to their friends.

The movie ends with credits in the style of a yearbook.

At the time, singer Olivia Newton-John (who was cast at the urging of John Travolta) had done little acting before this film. She appeared in the 1970 film Tomorrow, a science fiction musical that pre-dated her initial chart success with 1971's "If Not for You".

The cast with Newton-John and three male leads in an attempt by Don Kirshner to create another Monkees, but the film was never released commercially which led Newton-John to demand a screen test for Grease to avoid another career setback. The screen test was done with the drive-in movie scene.

Henry Winkler was once considered for a lead in the film, but he turned down the role due to fear of being typecast.

Adult film star Harry Reems was originally signed to play Coach Calhoun; however, executives at Paramount nixed the idea due to Reems' previous work in adult films & the producers cast Sid Caesar instead.

Randal Kleiser directed John Travolta (who requested him for "Grease") and Kelly Ward in the TV movie "The Boy in the Plastic Bubble" two years prior to making the movie. Additionally, he had previously worked (as an extra) alongside Frankie Avalon in 1966's Fireball 500.

The opening beach scene was shot at Malibu's Leo Carrillo State Beach, making an explicit reference to From Here to Eternity.

The sleepover scene was shot at a private house in East Hollywood.

The Paramount Pictures studio lot was the location of the scenes that involve Frosty Palace and the musical numbers "Greased Lightning" and "Beauty School Dropout". The drive-in movie scenes were shot at the Burbank Pickwick Drive-In (it was closed and torn down in 1989 and a shopping center took its place).

The race was filmed at the Los Angeles River, between the First and Seventh Street Bridges where many other films have been shot. The final scene where the carnival took place used John Marshall High School. Due to budget cuts, a short scene was filmed at Hazard Park (Los Angeles, California)

The scenes inside the Frosty Palace contain obvious blurring of various Coca-Cola signs. Prior to the film's release, the producer Allan Carr had made a product-placement deal with Coca-Cola's main competitor Pepsi (for example, a Pepsi logo can be seen in the animated opening sequence).

When Carr saw the footage of the scene with Coca-Cola products and signage, he ordered director Randal Kleiser to either reshoot the scene with Pepsi products or remove the Coca-Cola logos from the scene. As the reshoots were deemed too expensive and time-consuming, optical mattes were used to cover up or blur out the Coca-Cola references.

The "blurring" covered up trademarked menu signage and a large wall poster, but a red cooler with the logo could not be sufficiently altered so was left unchanged. According to Kleiser, "We just had to hope that Pepsi wouldn't complain. They didn't."

In the 2010 sing-along version of the movie, the blurred Coke poster has been digitally removed. In its place is more of the wavy wall design that surrounded it.

John Wilson did the animated title sequence for the beginning of the film.

"Grease" received mostly positive reviews from movie critics and is considered by many as one of the best films of 1978.

It currently holds an 80% "Certified Fresh" rating on the review aggregate website Rotten Tomatoes with a consensus that reads "Grease is a pleasing, energetic musical with infectiously catchy songs and an ode to young love that never gets old."

It holds a score of 70/100 on a similar website Metacritic.

Vincent Canby called the movie "terrific fun", describing it as a "contemporary fantasy about a 1950s teen-age musical—a larger, funnier, wittier and more imaginative-than-Hollywood movie with a life that is all its own".

Canby pointed out that the movie was "somewhat in the manner of Close Encounters of the Third Kind, which recalls the science-fiction films of the '50s in a manner more elegant and more benign than anything that was ever made then, Grease is a multimillion-dollar evocation of the B-picture quickies that Sam Katzman used to turn out in the '50s (Don't Knock the Rock, 1956) and that American International carried to the sea in the 1960s (Beach Party, 1963)."

In 1982, "Grease 2" was released, starring Maxwell Caufield and Michelle Pfeiffer.

Only a few cast members from the original movie such as Dody Goodman, Sid Caesar, Eddie Deezen, Didi Conn, Dennis Stewart and Eve Arden each reprised their respective roles. Dick Patterson returned to the sequel, playing a different character.

The sequel to "Grease" was not nearly as successful, grossing just $15 million on its $13 million budget. Patricia Birch, the original movie's choreographer, directed the ill-fated sequel. It would be the only movie that she would direct.

After the success of the original, Paramount intended to turn "Grease" into a multi-picture franchise with three sequels planned and a TV series down the road, but after the failure of "Grease 2," the plans were cancelled.

On July 8, 2010, a sing-along version of the movie was released to select theaters around the United States.

A trailer was released in May 2010 with cigarettes digitally removed from certain scenes, implying heavy editing; however, Paramount confirmed these changes were done only for the film's advertising and the rating for the film itself changed from its original PG to that of PG-13 for "sexual content including references, teen smoking and drinking, and language."

The movie was shown for two weekends only; additional cities lobbied by fans from the Paramount official website started a week later and was screened for one weekend.

Retrieved from "https://movies.fandom.com/wiki/Grease?oldid=318673"
Community content is available under CC-BY-SA unless otherwise noted.