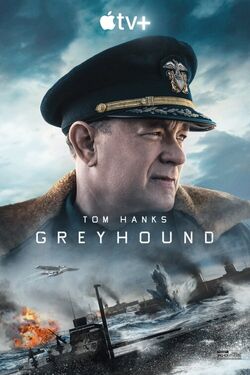 During World War II, an international convoy of 37 Allied ships, led by Commander Ernest Krause, cross the treacherous North Atlantic while being hotly pursued by wolf packs of German U-boats.

It was announced in September 2016 that Tom Hanks was writing a screenplay about a World War II Navy destroyer and would also star in the film. In February 2017, Aaron Schneider was brought on to direct the film, and Sony Pictures acquired the distribution rights.

Pre-production photography took place in January 2018 at sea on board HMCS Montréal. In March 2018, Stephen Graham, Elisabeth Shue, Rob Morgan, Karl Glusman, and Manuel Garcia-Rulfo were cast, and filming had begun in Louisiana, aboard USS Kidd in Baton Rouge.

The film was scheduled to be released on March 22, 2019, before being moved to May 8, 2020 then finally moved to June 12, 2020. The film was then taken off the release schedule due to the coronavirus pandemic. In May 2020, it was announced Apple TV+ had acquired distribution rights to the film for about $70 million, and will release the film digitally in July 10, 2020.[1]