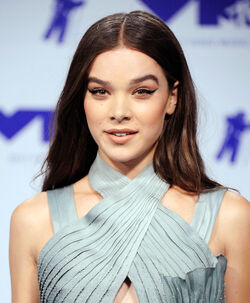 Hailee Steinfeld is an American actress and singer. She has been nominated for awards including an Oscar, a Golden Globe, a BAFTA, and four Critics Choice Awards, winning one for Best Young Performer.

Her breakthrough role was that of Mattie Ross in True Grit (2010), for which she was nominated for numerous awards, including the Academy Award for Best Supporting Actress. Thereafter, Steinfeld gained prominence for roles in Ender's Game (2013) and Romeo & Juliet (2013). She appeared as Emily Junk in Pitch Perfect 2 (2015) and Pitch Perfect 3 (2017), and she received a Golden Globe Award nomination for Best Actress – Motion Picture Comedy or Musical for her portrayal of Nadine Franklin in The Edge of Seventeen (2016). She also stars in the prequel, Bumblebee (2018), and she contributed to the soundtrack of the film.

Steinfeld was born on December 11, 1996, in the Tarzana neighborhood of Los Angeles, California, the daughter of Cheri (née Domasin), an interior designer, and Peter Steinfeld, a personal fitness trainer. She has an older brother, Griffin. Her paternal uncle is fitness trainer Jake Steinfeld, and her maternal grand-uncle is former child actor Larry Domasin. Her maternal first cousin, actress True O'Brien, appeared in a television commercial when Steinfeld was eight years old, inspiring her to try acting as well.

Steinfeld's father is Jewish. Her maternal grandfather, Ricardo Domasin, was of half Filipino (from Bohol) and half African-American descent. Steinfeld was raised in Agoura Hills and later in Thousand Oaks, California, attending Ascension Lutheran School, Conejo Elementary, and Colina Middle School. She was home-schooled from 2008 until her high school graduation in June 2015.

Is of Filipino, European-American and North African descent.

Presented at the 2011 Golden Globes with Justin Bieber.