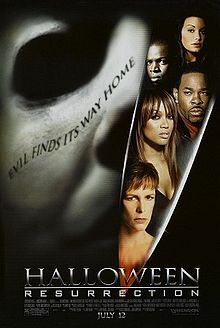 Halloween: Resurrection (also known as Halloween 8 or Halloween: Homecoming) is a 2002 American horror film and eighth installment in the Halloween film series. Directed by Rick Rosenthal, who had also directed Halloween II in 1981, the film builds upon the continuity of Halloween H20: 20 Years Later. It continues with the masked serial killer Michael Myers continuing his murderous rampage in his hometown of Haddonfield. Yet, this time, the killer's his old, derelict childhood home is being used for a live internet horror show. Just like its previous installment, Resurrection insists that fourth, fifth, and sixth installments in the film series are not canon.

Actress Jamie Lee Curtis returned in her long-running role as Laurie Strode; Larry Brand and Sean Hood devised the screenplay. The film came out to largely negative critical reviews, having just a 12% score on Rotten Tomatoes, but it was somewhat of a box office success, with over $30 million made in the box office. Resurrection is currently the final installment in the original Halloween film series. Although more sequels were planned to follow Resurrection, the series was eventually rebooted with Rob Zombie's 2007 remake of the original Halloween.

Three years after the events of the previous film, Laurie Strode (Jamie Lee Curtis) had been sent to a psychiatric hospital after it is revealed that she had beheaded a paramedic instead of her brother Michael; the paramedic had located the body of Myers in the dining hall of Laurie's school, after the paramedic tried to grab his mask, Myers attacks the paramedic, and crushed his larynx so he wouldn't cry out and forcefully switched clothing and his mask. As Laurie drives the coroner's van out of the school, Myers in the paramedics clothing walks out of the Hillcrest Academy school grounds and slips off into the woods, going into hiding for the next three years.

On October 31, 2001, still in captivity, Laurie, pretending to be heavily medicated, prepares herself for the inevitable confrontation with Michael. Michael appears at the hospital and kills two security guards by decapitating one and slitting the throat of the other before going after Laurie. Laurie lures Michael into a trap, but as she attempts to kill him, she second guesses herself and goes to remove his mask to make sure that it is really her brother this time. Myers takes advantage, and stabs her in the back before sending her off the roof to her death. His mission is complete after more than twenty years of tracking Laurie down.

The following year, six college students – Bill Woodlake (Thomas Ian Nicholas), Donna Chang (Daisy McCrackin), Jen Danzig (Katee Sackhoff), Jim Morgan (Luke Kirby), Rudy Grimes (Sean Patrick Thomas), and Sara Moyer (Bianca Kajlich) – win a competition to appear on an Internet reality show directed by Freddie Harris (Busta Rhymes) and his assistant, Nora Winston (Tyra Banks), in which they have to spend a night in Michael's childhood home in order to find out what led him to kill. On Halloween, each equipped with head-cameras as well as the cameras laid throughout the house, they start the show, searching the entire house for something that can provide a clue to Michael's past, and decide to separate into three groups to cover more areas. Sara's messaging friend "Deckard" (Ryan Merriman) watches the broadcast during a Halloween party.

As the group searches the house, Donna and Jim begin getting intimate in the basement. Before anything can happen, a wall filled with corpses falls on them. Initially freaked out, upon closer inspection, Jim realizes the "corpses" are fake; the whole show is a setup. Jim leaves, but Donna notices a tunnel behind the fallen wall. After following it for a ways, she discovers she is being followed by Myers. Myers chases her through the tunnels before impaling her on a spike on the wall. At the party, Deckard and other partygoers witness the murder. Deckard realizes that the murder was real, but the others believe it is an act.

Meanwhile, Freddie goes through the house dressed as Myers, but is secretly followed by the real Myers. Freddie, mistaking Michael for Charlie (a cameraman who had been killed earlier with a camera tripod leg through his throat), tells him to go to the garage and help Nora out. When Rudy, Sara, and Jim find Freddie in the Myers costume, he reveals the scheme to them and begs them to cooperate. When he leaves, the trio decides to gather up the other three and leave. But before they can, Jen discovers the body of Bill (who was stabbed in the head and vanished earlier) and is decapitated by the real Myers right in front of Rudy, Sara, and Jim. Rudy and Sara flee, but Jim stays to fend off Myers only to have his head crushed. Myers then kills Rudy by pinning him to the door with kitchen knives before chasing Sara upstairs.

Locking herself in a bedroom, Sara begs for Deckard to help her. The other partiers begin realizing that the deaths have not been staged, and that everyone is, in fact, dead. With Deckard messaging her Myers' location, Sara manages to escape and is found by Freddie, who tells her that Nora is dead (having been killed by Myers off-screen). Before they can leave, Myers finds and attacks them. Freddie is injured and Sara makes her way to the tunnels. She finds an exit near Donna's body and emerges in the garage. As Myers finds her, Freddie returns and begins fighting Myers hand-to-hand. Freddie electrocutes Myers, tangling him up in electrical wiring before carrying Sara out of the burning garage.

Myers' body is taken to the morgue. As the pathologist begins to examine the body, Myers' eyes open and the scene cuts to black.

According to the Halloween: 25 Years of Terror documentary DVD, Miramax wanted to take Michael Myers out of the film but Moustapha Akkad and the fans disagreed and insisted that it would be another "Michael Myers piece". After learning a lesson with Halloween III: Season of the Witch, a movie that had experimented with a different story-line and failed to achieve expected success, Miramax had decided not to develop another sequel without the Myers character. The film's working title was "Halloween: The Homecoming", but producers wanted a title that said Michael Myers is alive, so in February 2002, the film was officially renamed as "Halloween: Resurrection". Also, the release date for the film was originally set as September 21, 2001, but producers at Dimension Films wanted the film to be stronger so re-shoots took place from September to October 2001. The release date was thus changed to April 19, 2002 and then again to July 12, 2002.

Both Whitney Ransick and Dwight H. Little were approached to direct the film but turned it down. Later Rick Rosenthal, the director of Halloween II, was chosen to direct. During the casting period of the film, producers considered Danielle Harris (who played Jamie Lloyd in Halloween 4: The Return of Michael Myers and Halloween 5: The Revenge of Michael Myers) for a role in the film. In post production Bianca Kajlich's screams had to be dubbed because of her inability to scream. The film's trailer was delivered on April 26, 2002 with the release of Jason X. Principal photography began in Vancouver, British Columbia in 2001 with the opening scene filmed at Riverview Hospital in Coquitlam, BC.

Halloween: Resurrections delayed production and reshoots meant at least two alternate versions exist. The first workprint, titled onscreen as Halloween: The Homecoming, contained differences, some of which appeared on the DVD release including an alternate opening, multiple alternate endings, deleted scenes and an alternate score. Screencaps from a second workprint featuring deleted and alternate footage have been posted online, but copies are rare. This workprint is rumored to include the following deleted scenes, some of which are viewable on the retail DVD and YouTube.

The film received highly unfavorable reviews from several critics. It has garnered a score of 12% on Rotten Tomatoes based on 59 reviews and a 12% among top critics based on 16 reviews, with the site's consensus being: "The only thing this tired slasher flick may resurrect is nostalgia for when the genre was still fresh and scary." Lou Lumenick of the New York Post said, "It's so devoid of joy and energy it makes even  '​Jason X '​ look positively Shakespearian by comparison." Dave Kehr of The New York Times said, "Spectators will indeed sit open-mouthed before the screen, not screaming but yawning."[6] Peter Travers of Rolling Stone magazine said, "Every sequel you skip will be two hours gained. Consider this review life-affirming." Joe Leydon of Variety said, "[Seems] even more uselessly redundant and shamelessly money-grubbing than most third-rate horror sequels." Glenn Lovell of the San Jose Mercury News was slightly more positive: "No, it's not as single-minded as John Carpenter's original, but it's sure a lot smarter and more unnerving than the sequels."