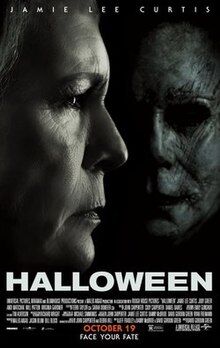 Halloween is a 2018 American horror film directed by David Gordon Green. It serves as a sequel to 1978's Halloween. The cast of the film consists of Jamie Lee Curtis, Judy Greer, Andi Matichak, Will Patton, Virginia Gardner, and Nick Castle.

On October 29, 2018, Michael Myers, who has been in Warren County Smith's Grove Sanitarium for forty years since his killing spree in Haddonfield, is being prepared for transfer to a new facility. True-crime podcasters Aaron Korey and Dana Haines interview Dr. Ranbir Sartain, Dr. Samuel Loomis' former student until he died, before meeting with Michael to gain some insight into his past actions. Aaron brandishes the mask that Michael wore in 1978, at him, to no effect.

In Haddonfield, Illinois, Laurie Strode is living an isolated life, in her heavily fortified house. She has been divorced twice, having a strained relationship with her daughter Karen, and became an alcoholic. Laurie is far from happy, as the tragic events from 1978 still haunt her; she has prepared for Michael's potential return through combat training. The following night, Michael's transport crashes, and he escapes, killing a father and son for their car, and returns home to Haddonfield. The following day, on Halloween, Michael spots Aaron and Dana visiting his sister Judith's grave in the local cemetery, and follows them to a gas station, where he kills them, as well as a mechanic for his coveralls, and recovers his mask. Deputy Frank Hawkins, who arrested Michael in 1978, tries to convince Sheriff Barker about the danger Michael poses after learning that Michael has escaped transfer. Laurie discovers Michael's getaway after overhearing a news broadcast and attempts to warn Karen and her husband Ray, but they dismiss her concerns.

Later that night, Michael steals a kitchen knife and kills two women. Meanwhile, Allyson Nelson, Karen's daughter, finds her boyfriend Cameron Elam cheating on her at a school-sponsored Halloween party, and leaves with his best friend, Oscar. Allyson's best friend Vicky babysits Julian Morrisey, when her boyfriend, Dave arrives. Michael, who had hidden in the closet, attacks them. Vicky sacrifices herself to save Julian, and Michael fatally stabs her. Julian flees, as Michael kills Dave. Hawkins and Laurie hear the incident over the radio and go over to the house, where Hawkins finds the bodies of Vicky and Dave. Hawkins and Laurie find Michael, and he and Laurie come face-to-face for the first time in forty years. Laurie shoots Michael, who flees, and Sartain persuades Sheriff Barker to allow him to help the hunt for Michael. Laurie persuades Karen and Ray to seek protection in her house. Michael comes across Allyson and Oscar, killing the latter. Hawkins and Sartain arrive just in time to save Allyson. Hawkins tries to kill Michael, but Sartain – obsessed with Michael's enigmatic motivations – kills Hawkins, and reveals he seeks to understand how Michael feels when he kills, and reveals that he arranged for Michael's escape to reinforce his perceived role as an "apex predator" who needs to finish what he started and kill Laurie to reassert himself. Sartain, hoping to see his patient in action, is killed by Michael. Allyson flees, while Michael kills two deputies for their car. Allyson arrives at Laurie's house, where Michael appears and kills Ray.

Laurie manages to get Karen to safety, before she engages in a showdown with Michael. Laurie severely injures Michael and severs two of his fingers, but he stabs her in the abdomen and pushes her over a balcony; when Michael goes to check Laurie's body, he finds it missing. As Michael pursues Allyson and Karen, the latter shoots Michael in the jaw. Laurie suddenly appears and attacks him, trapping him inside the basement safe room. Laurie, Karen and Allyson set the house ablaze, and the trio escapes in the back of a passing pickup truck. A final shot of the burning basement is shown, with Michael nowhere to be seen. In a post-credits scene, Michael's breathing is heard, indicating that he survived.

On review aggregator Rotten Tomatoes, the film holds an approval rating of 83% based on 40 reviews, with an average rating of 7.2/10. The site's critical consensus reads, "Halloween largely wipes the slate clean after decades of disappointing sequels, ignoring increasingly elaborate mythology in favor of basic - yet still effective - ingredients." On Metacritic, the film has a weighted average score of 66 out of 100, based on 17 critics, indicating "generally favorable reviews".