Halloween 5: The Revenge of Michael Myers

View src
watch 03:36
Wiki Targeted (Entertainment)
Do you like this video?
Play Sound
Halloween 5: The Revenge of Michael Myers 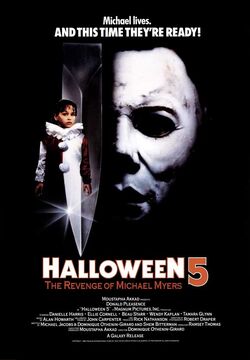 It is exactly one year later since Michael Myers returned to terrorize his hometown of Haddonfield, and his long-lost niece, Jamie Lloyd. Now, he wants revenge!

Young Jamie (who has lost her ability to speak since attacking her foster mother) has developed a telepathic link with her demonic uncle. The ever resourceful Dr. Sam Loomis has realized this and plans to use it to finally put an end to Michael's rage.

But unbeknownst to them, a stranger has come to Haddonfield, and he is a key factor in the outcome of the madness that has plagued Haddonfield on Halloween for over ten years!